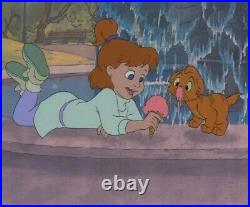 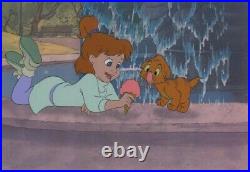 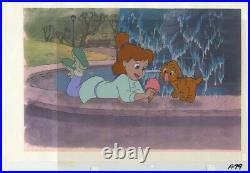 The cels appear after Oliver comes to live with Jenny, and in a sweet interlude the little girl and her kitten frolic in New York City's Central Park. The cels were selected and prepared by Disney as part of its art program; they are set over a color print of the matching background from the film. The sheets are numbered "A79" and "79" at lower right corner to mark each cel's place in the scene. Custom matting is included but only for the protection of the cels and are as is. A certificate of authenticity is included.

This item is in the category "Collectibles\Animation Art & Merchandise\Animation Art". The seller is "efmbuys" and is located in this country: US. This item can be shipped to United States.