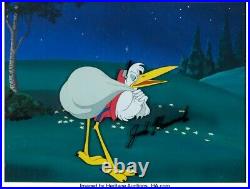 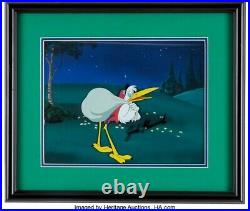 Disney Lambert the Sheepish Lion 1952 Stork Framed Production Cel Signed by Jack Hannah. Hand-inked and hand-painted production cel of the stork from the opening scene of the Academy Award nominated short, Lambert the Sheepish Lion , directed by Jack Hannah. The stork is delivering a baby lion by mistake to a flock of sheep. Based on a Bill Pete story and narrated by Sterling Holloway, Lambert has one line, "Mama, " and is voiced by Stan Freberg. June Foray does some uncredited sheep voices. This cel is placed on a print background for presentation purposes. Nice large image of 5. Framed to an overall 16" x 14" and matted to an image area of 10.75.

The item "Disney Lambert the Sheepish Lion Signed Original Production Cel Framed Rare" is in sale since Tuesday, August 10, 2021. This item is in the category "Collectibles\Animation Art & Merchandise\Animation Art". The seller is "efmbuys" and is located in La Palma, California. This item can be shipped to United States.