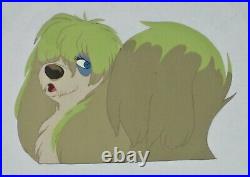 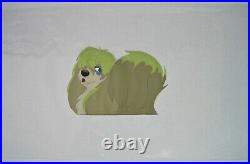 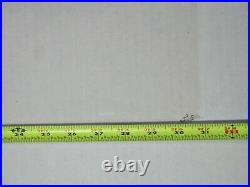 Disney Lady and the Tramp Peg 31 CinemaScope Original Production Cel. Beautiful untrimmed 31 original CinemaScope wide-screen production animation cel. Voiced by Peggy Lee, whose "He's a Tramp" became one of the hit songs from the movie. Animation cel of Peg was created in the Disney ink-and-paint department and photographed during the making of the animated feature. Peg image measures 5.5" x 7.75" and the overall cel size is 12.5 x 31 with 35 written in the bottom right corner to indicate its position in the scene.

The bottom right corner of the cel is folded over but not damaged. Overall condition of the cel is very fine. This was the first Disney animated feature filmed in CinemaScope. Presented in an aspect ratio of 2.55:1, it is, to date, the widest film that Disney has ever produced. Sleeping Beauty was also produced for an original 2.55:1 aspect ratio but was never presented in theaters this way. This new innovation of CinemaScope presented some additional problems for the animators: the expansion of canvas space makes it difficult for a single character to dominate the screen, and groups must be spread out to keep the screen from appearing sparse. Layout artists essentially had to reinvent their technique.

Animators had to remember that they could move their characters across a background instead of the background passing behind them. More problems arose as the premiere date got closer. Although CinemaScope was becoming a growing interest to movie-goers, not all theaters had the capabilities at the time. Upon learning this, Walt issued two versions of the film to be created: one in widescreen and another in the original aspect ratio.

This involved gathering the layout artists to restructure key scenes when characters were on the outside area of the screen. The item "Disney Lady and the Tramp Peg 31 CinemaScope Original Production Cel" is in sale since Tuesday, October 12, 2021. This item is in the category "Collectibles\Animation Art & Merchandise\Animation Art".