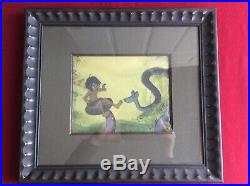 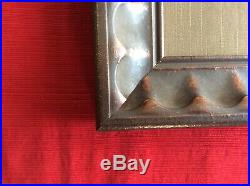 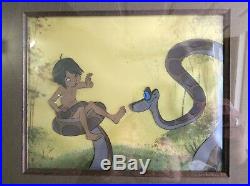 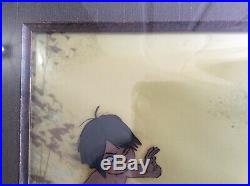 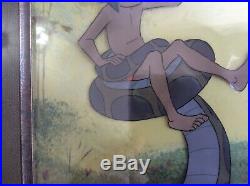 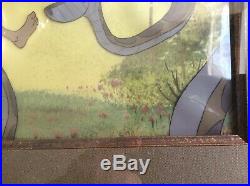 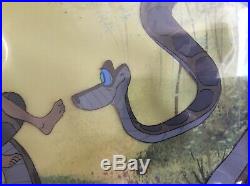 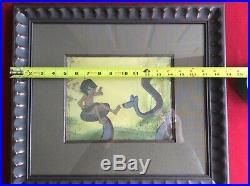 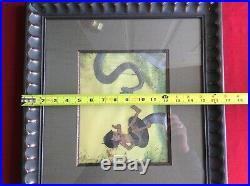 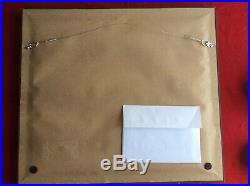 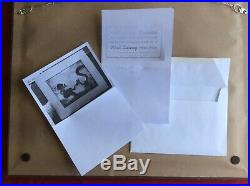 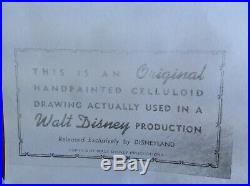 Disney's "The Jungle Book" - "Trust in Me" - Original production cel. NOTE : the cel (mat and gold sticker) is framed and is still in its original packaging within the frame. In an envelope on the back of the frame are contained copies of the original matting and gold sticker (see pictures). The best of both - in its original packaging yet framed to enjoy and protect. A wonderful heirloom and investment. The Jungle Book was the last motion picture worked on personally by Walt Disney. Trust in Me the most iconic scene from the Jungle Book - the actual production cel!

Youll never see this again. Downsizing and will be listing many Jungle Book - Kaa and Mowgli items. Huge Disney fan but only collected items to do with Kaa and Mowgli TOGETHER - had to focus on something with Disneys huge universe.

"The Jungle Book, " 1967 was the nineteenth animated feature film produced by Walt Disney Productions and inspired by Rudyard Kipling's book of the same name. The film was directed by Wolfgang Reitherman, it was to be the last film that was worked on by Walt Disney, as he passed away during its production. The film follows Mowgli, a feral child raised in the Indian jungle by wolves, as he encounters Bagheera the panther and Baloo the bear; who try and convince him to leave the jungle before the villainous tiger Shere Khan finds him.

Shere Khan, a Bengal tiger and Kaa a python were the main Villains in the 1967 Walt Disney film "The Jungle Book;" an adaption of writer Rudyard Kipling's series of stories. Wolfgang Reitherman was the animation director for the film and he began working for Walt Disney in 1934, along with future Disney legends Ward Kimball and Milt Kahl. The three worked together on a number of classic Disney shorts, including "The Band Concert, " "Music Land, " and Elmer Elephant. " Reitherman worked on various Disney feature films produced from 1937 to 1981, including "Snow White and the Seven Dwarfs" (animating the Slave in the Magic Mirror) up to "The Fox and the Hound, where he was the co-producer. Beginning with 1961's "One Hundred and One Dalmatians, " "Woolie", as he was called by friends, served as Disney's chief animation director.

Kaa the python, was animated by Frank Thomas in his entrance appearance of the film which is when Kaa first meets Mowgli and nearly eats Bagheera. Kaa was the second character who was originally voiced by Sterling Holloway, the first being Winnie-the-Pooh. Holloway's voice is just so wonderful in tone and pitch, and it is hard to imagine any other person doing the character justice. Kaa is very similar to another snake character, Sir Hiss from "Robin Hood".

The two share several traits as both use hypnosis, and both suck up to the film's main antagonist (Shere Khan in Kaa's case, and Prince John in Sir Hiss's case). Exceptions are that they are different colors, sizes, and Sir Hiss wears clothing (cape and hat). "Trust In Me" ("The Python's Song") was sung by Sterling Holloway and was written by famed Disney songwriters, Robert and Richard Sherman. In this wonderful cel setup (just prior to Kaa singing Trust In Me), Kaa is trying to convince Mowgli that he is his friend, and wants nothing more than to help the boy.

Milt Kahl's animation of Kaa is really brilliant as Mowgli tries to hide his eyes from Kaa's hypnotic stare; Kaa says to Mowgli You don't want me to look at you? Then you look at me. " Both characters are eyes open; and original artwork from "The Jungle Book has become rare to the market. This would be a wonderful addition to any Walt Disney animation art collection!