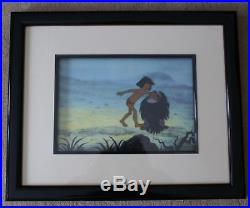 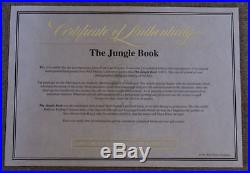 Check out my other items. Be sure to add me to your favorites list. 17 Year Old NEWS: The Animation Art Division of Walt Disney Art Classics officially closed "FOREVER" on February 28, 2001. The Disney Animation Art available to the public, now in various venues, consists of only items from Licensed Distributor inventory stockpiles or private collections after February 28, 2001.

Do not be confused by todays computer generated prints from newer digital features. "The Jungle Book" (1967 - 51 Years Ago). This is a one-of-a-kind hand painted animation cel used in the production of the feature film. The Certificate of Authenticity is included. Double gloss black framing with off-white cloth mat.

Frame size: 22" x 18". Image size: 13" x 9". Bruce Reitherman was the voice for Mowgli an orphaned boy, commonly referred to as "man-cub" by the other characters. "The Jungle Book" was the last feature film to bear Walt Disney's personal touch, as Walt died during its production. The Original Production Cel is matched with a color reprodustion of its original hand-painted background. This one-of-a-kind cel was photographed during the making of the film. Just the way it was acquired from Disney. It was acquired without a box. The item "Disney Jungle Book Animated Feature Film Original Production Cel 1967" is in sale since Monday, January 20, 2014. This item is in the category "Collectibles\Disneyana\Vintage (Pre-1968)\Animation Art, Cels".

The seller is "picseller32830" and is located in Crystal Lake, Illinois. This item can be shipped to United States.