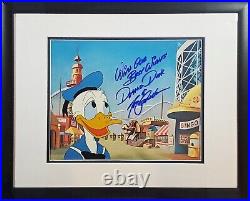 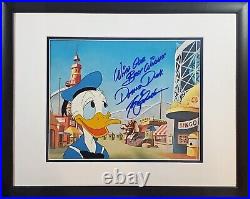 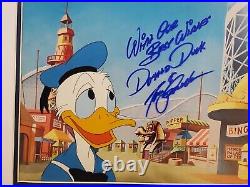 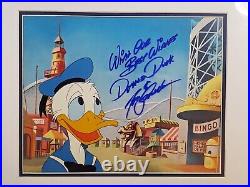 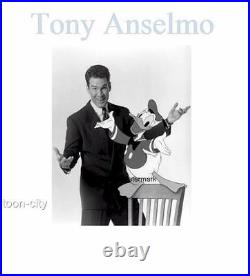 Hand signed by the official voice of Donald... New Frame, custom printed background just for this piece. Comes with a Letter of Authentication from JSA Authentication.

This piece has been hand signed by Tony Anselmo. The voice of Donald Duck and lead animator at Disney's feature Animation studio in Glendale, CA. Tony was hand selected by Clarence Nash the original voice of Donald from the 1930's, to replace him.

BIO : Tony Anselmo (born February 18, 1960)[1] is an American voice actor and animator. Since 1985, he has been the official character voice of Donald Duck.

Anselmo moved from a student role at CalArts to a professional one at Disney animation, he was assigned to a new and more intense course of study at the Studio. Anselmo says, Ron Miller had just set up a program called the Disney School of Animation on the lot with Don Hahn, to train new artists in carrying on Walt's traditions in character animation. We weren't even in production. We were being paid to animate tests with Eric Larson, studying life drawing with Walt Stanchfield, and learning more than we had at CalArts. It was an immersion in Disney character animation. One of the Disney stalwarts that Anselmo frequently encountered during his early days at Disney was Clarence Nash, the original voice of Donald Duck. Tony's friendship with Nash started casually. Anselmo says, I was really just curious about it, because I could do voices, and that was one voice I couldn't do. Unable to duplicate the sound, Anselmo asked Nash to show him his technique.

"It took me a long time to learn that, and actually I think it took Clarence a while to perfect that as well, " Anselmo says. This item is in the category "Collectibles\Animation Art & Merchandise\Animation Art".