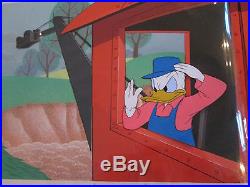 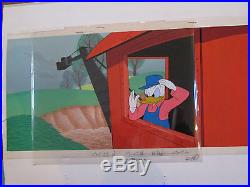 Here's a hand-painted production cel of Donald Duck on the hand-painted. Production background from the 1954 Disney cartoon, "Dragon Around". The cel is 10 x 12 in. The cel has #2463, so does the back of the background.

2463 is the Disney numbering code for "Dragon Around". The production background is 9 x 17.5 in. Eyvind Earle worked on this film. The trees are done in the style of Earle. The item "Disney Donald Duck cel on Production Background Dragon Around 1954" is in sale since Sunday, January 3, 2016.

This item is in the category "Collectibles\Disneyana\Vintage (Pre-1968)\Animation Art, Cels". The seller is "russcel" and is located in Northridge, California.