Disney Animation Production Cel Winnie The Pooh and Tigger Too 1974 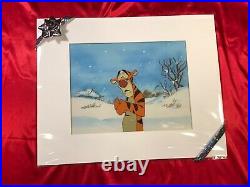 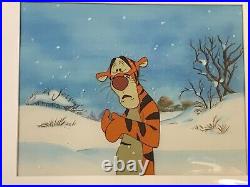 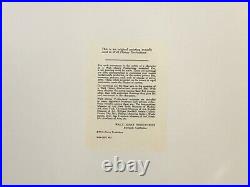 Here is an extremely rare Disney animation production cel of that lovable Winnie The Pooh character Tigger from the Walt Disney Classic 1974 animated featurette Winnie The Pooh and Tigger Too. This adorable production cel is from that unforgettable scene where Tigger is told that he can no longer bounce. Who does not remember this classic scene? This beautiful setup features the snow effects and painted background.

Many of these production cels we have been told were laminated, but not this one! The lamination process which was used unfortunately has destroyed many of the Disney production cels from the 70's and 80's, but this one was never touched and is as beautiful as the day it was photographed for the film. Animated by the Legendary Disney animator Milt Kahl, this production cel features Tigger in what critics agree is the highlighted scene in this film. This is why it has such a high price tag, as does any artwork worth owning. This Disney production cel of Tigger is quite large and is complete with peg holes and exposure number.

This art has been professionally matted in a acid free beveled cut matting that measures a large 20" by 16" in size, ready to be framed. This is one of the nicest Tigger Animation Production cels we have ever seen and will definitely make that special person on your gift giving list jump for joy, just like Tigger! You are looking for a Really Beautiful gift to give that special Disney fan this Christmas Season, look no further. This heart warming Tigger Disney Production Cel is sure to make someone's 2021 Holiday Extra Bright! This item is in the category "Collectibles\Animation Art & Merchandise\Animation Art". The seller is "bluejay7579" and is located in this country: US. This item can be shipped to United States, Canada.