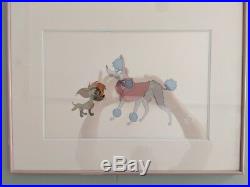 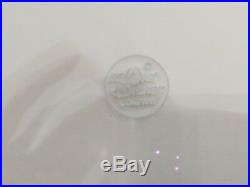 Original Walt Disney Pictures production cel from Disney's Oliver and Company (1988). Oliver wrapped, everyone who worked on the show was allowed to choose a cel. I wanted to make sure I had a preferred "extreme" drawing, which is the drawing executed by the animator himself, and not his assistants, who make the "in-betweens" and "clean up" the drawings before they are transferred to acetate cels and painted by hand in the Ink and Paint department. Sophisticated collectors know the difference. There is an hilarious subplot in the movie in which the tough-talking.

Chihuahua voiced by Cheech Marin falls madly in love with the Park Avenue Poodle played by Bette Midler. " Tito responds, "I think she loves me, man! Disney is not making animated movies by hand anymore, so there won't be any more production cels. This is the last of its kind: drawn, traced, inked by hand, and painstakingly photographed one frame at a time. The piece is professionally framed, measuring 19x16 inches. The actual cel is 8 1/2 x 11 inches and includes the registration pins.

If you would like, I will write and have notarized the story of this amazing piece of original animation art. I hate to sell this piece, but we're downsizing, and everything must go. It deserves a better home, where it can be seen every day. The item "Disney Animation Production Cel Oliver & Company (1988) Georgette & Tito" is in sale since Saturday, August 25, 2018.