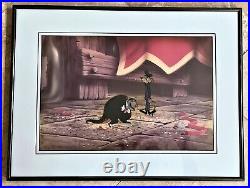 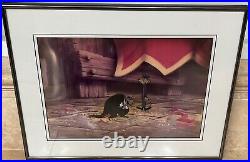 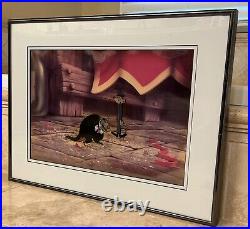 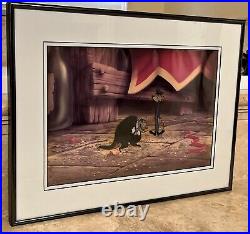 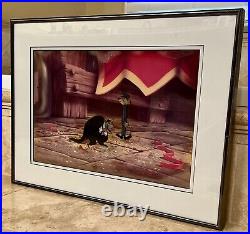 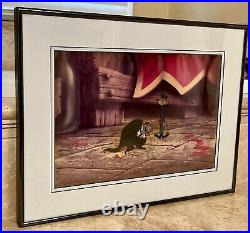 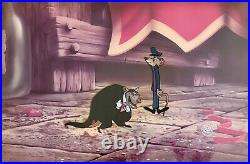 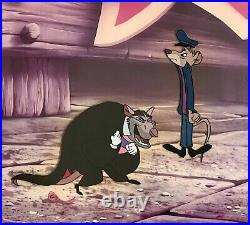 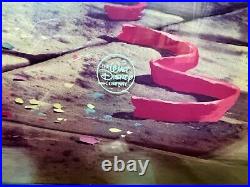 Based on the children's book series Basil of Baker Street by Eve Titus and Paul Galdone, it draws heavily on the tradition of Sherlock Holmes with a heroic mouse who consciously emulates the detective. Titus named the main character after actor Basil Rathbone, who is best remembered for playing Holmes in film (and whose voice, sampled from a 1966 reading of "The Red-Headed League" was the voice of Holmes in this film, 19 years after his death).

Sherlock Holmes also mentions "Basil" as one of his aliases in the Arthur Conan Doyle story "The Adventure of Black Peter". Original animation production cel with background. Pictured in this cell are Ratigan & Basil. The Walt Disney Company Seal on the lower right.

Professionally framed using acid free mat set under Plexiglas. Displayed in a smoke & pet free climate controlled environment. No direct exposure to sunlight. Framed 20.25" W x 15.25" H x 1 D. Unframed 15.25" x 10.25". This item is in the category "Collectibles\Animation Art & Merchandise\Animation Art". The seller is "904*arias" and is located in this country: US. This item can be shipped to United States.