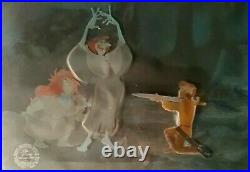 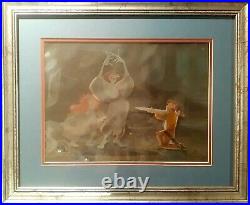 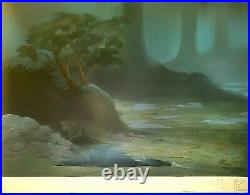 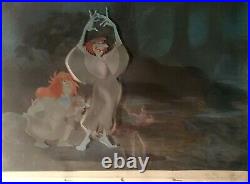 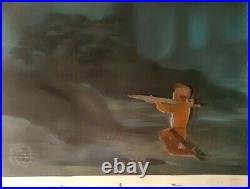 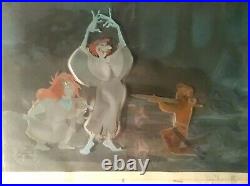 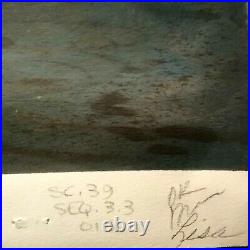 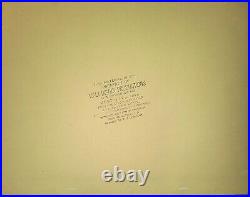 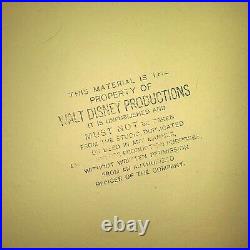 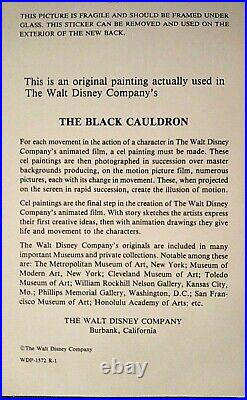 "BLACK CAULDRON" 16FLD PRODUCTION BG SETUP, 16FLD HAND-PAINTED LAMINATED PRODUCTION CELS OF TARAN (WITH DISNEY SEAL), AND KEY MATCHING CEL OF THE TWO WITCHES ON A 16FLD HAND-PAINTED MASTER PRODUCTION BG OF THE FOREST THAT ACTUALLY APPEARED IN THE 1985 DISNEY FEATURE FILM. THIS SETUP COMES WITH A DISNEY COA, AS WELL AS THE DISNEY SEAL ON THE TARAN CEL. QUESTIONS: CALL ME ANYTIME 9-9 EST (NYC Time), 7 days, at: 888-TOLKIEN. WE HAVE BEEN DEALING IN ANIMATION ART, BOTH RETAIL AND WHOLESALE, FOR OVER 40 YEARS, AND THIS SETUP OF THE DRAMATIC SCENE BETWEEN THREE MAJOR CHARACTERS ON A TRULY OUTSTANDING MASTER PRODUCTION BG (EVEN THOUGH IT CANNOT BE SEEN IN ITS FULL GLORY UNDER ALL THE CELS-- SO PLEASE SEE THE PHOTOGRAPH OF THE BG ALONE) IS ONE OF THE BEST FROM THE FILM. IT'S THE TENSE SCENE WHEN TARAN KNEELS BEFORE TWO OF THE THREE WITCHES, TO PRESENT THEM WITH THE SWORD.

DOUBLE MATTED IN BLUE AND BURNT ORANGE, 20" x 16" MATS WITH A 15" x 11" MAT OPENING, AND PLACED IN A 20" x 16" CUSTOM SILVER MARBLE FINISH WOODEN FRAME, READY TO BE. Photographed Framed with custom glass which did cause some glare and reflections when photographed (please excuse-- the colors are much brighter than the photographs indicate).

The laminated cels could easily be trimmed to figure and mounted on a new 16fld cel, if you wished to have this done. This would eliminate the "halos" around two of the cels that you can see in the photographs above, tho I think the minor "haloing" lends the scene a mystic quality that adds to the ambience. This Original, Hand-Painted Production Setup has been stored in our Light-Controlled/Temperature Controlled Gallery for the last several decades, and.

Is still in Pristine MINT condition, with Bright, Lustrous, UNfaded colors. It can be easily and cheaply replaced at any of your local frame shops or hardware or hobby supply stores. In addition to Limited Edition Cels, Sericels, and Production Cels, we also have a vast inventory of Cels on Production Backgrounds-- both Key (Matching) setups, and Wonderful "Marriages" not Key, but work really well together! We carry setups from Disney, Bluth, Bakshi and Heavy Metal Studios. We also carry several of the Walt Disney Collectors Club (WDCC) figurines, as well as a huge variety of other Disney figures and collectibles from most of the major manufacturers: Disney, Enesco, Goebel, Schmid, Anri, Laurenz Capodimonte, etc.

We also carry fantasy and science fiction and dinosaur action figures, figurines, sculptures and toys-- as well as related magazines and other collectibles. Krenkel, Al Williamson, Esteban Maroto, Tim Kirk, Alicia Austin, Steve Hickman, Peter Pracownik and Many, MANY others! This item is in the category "Collectibles\Animation Art & Merchandise\Animation Art". The seller is "fairfaxprints1951" and is located in this country: US. This item can be shipped to United States, Canada.