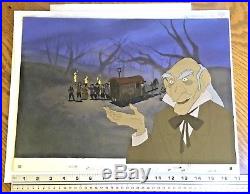 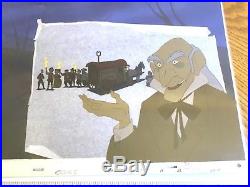 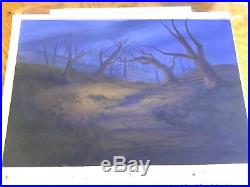 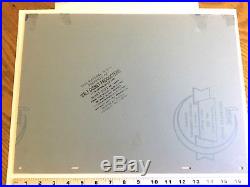 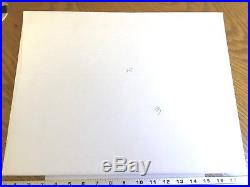 16-field Beauty and the Beast (1991) movie production background, with a Disney created matching cel overlay. The scene shows Monsieur D'Arque, the insane asylum warden, looking his sinister best with a horse-drawn cage and a mob of torch-wielding villagers behind him. He came to take away Belle's father as part of Gaston's scheme to make Belle marry him.

The closest thing you could get was a Production Background with a cel created by Disney from the original drawing. Cel and background are both in excellent condition. The item "Beauty & Beast (1991) Production Background matching animation cel Disney obg" is in sale since Monday, October 22, 2018. This item is in the category "Collectibles\Disneyana\Contemporary (1968-Now)\Animation Art, Cels".

The seller is "benkin" and is located in Staten Island, New York. This item can be shipped to United States.