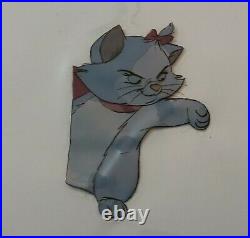 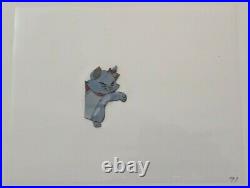 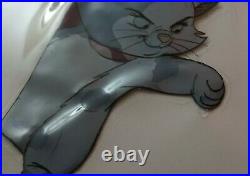 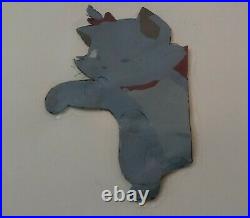 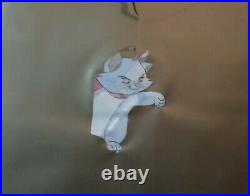 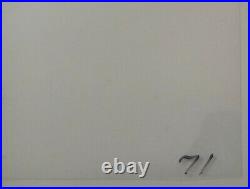 And welcome to a Hunter Animation Gallery listing. Please take the time to read thoroughly so you understand all available information about this item. Today you are looking at an original production cel from Aristocats. The Aristocats is a 1970 American animated romantic musical comedy film produced by Walt Disney Productions and directed by Wolfgang Reitherman.

The 20th Disney film, it is based on a story by Tom McGowan and Tom Rowe, and revolves around a family of aristocratic cats, and how an alley cat acquaintance helps them after a butler has kidnapped them to gain his mistress's fortune which was intended to go to them. The film features the voices of Phil Harris, Eva Gabor, Hermione Baddeley, Dean Clark, Sterling Holloway, Scatman Crothers, and Roddy Maude-Roxby.

In 1962, The Aristocats project began as an original script for a two-part live-action episode for Walt Disney's Wonderful World of Color, developed by writers Tom McGowan and Tom Rowe and producer Harry Tytle. Following two years of re-writes, Walt Disney suggested the project would be more suitable for an animated film, and placed the project in turnaround as The Jungle Book advanced into production. When The Jungle Book was nearly complete, Disney appointed Ken Anderson to develop preliminary work on The Aristocats, making it the last film project to be approved by Disney personally before his death in December 1966.

Longtime Disney collaborators Robert and Richard Sherman composed multiple songs for the film, though only two made it in the finished product. The Aristocats was released on December 24, 1970, to positive reception and was a box office success.

Subject of Piece: 3/4s body shot of Marie, sneaking around a wall, about to bat something with her Paw Cel Layering: 1 layer Background: N/A Production Drawing: N/A Damage: Good condition. Due to age, there is paint separation, and minor cracking on the cel paint. I have done my best to picture this.

The general consensus is that it is too difficult to try to create convincing counterfeits. We have firm confidence here at Hunter Animation Gallery in our ability to provide only authentic production art, but if you have any questions about any piece, please send them our way. Should I be concerned about damage?