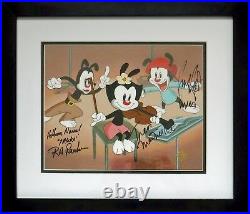 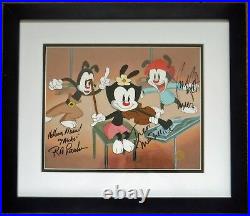 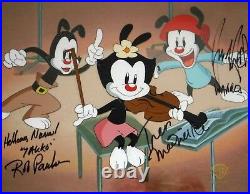 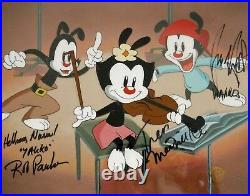 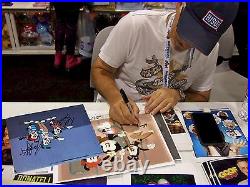 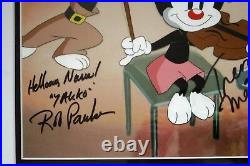 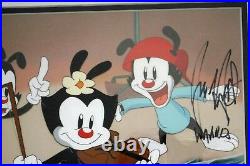 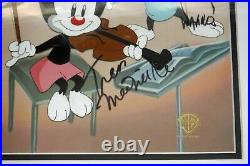 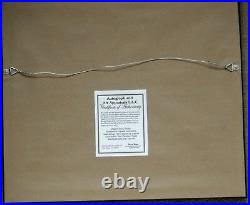 Each character is on a separate cel level. Comes with the Warner Bros Animation Art Seal embossed on the cel in the lower right corner.

The hand painted characters are 8 x 6.5 inches. BONUS : Piece is hand signed by ALL THREE VOICES Rob Paulsen , Jess Harnell and Tress MacNeille. We got this signed at Disney's D23, 2015. And the rest at the San Diego Comic Con 2016 after their Panel. Brand NEW Solid Wood Frame.

20 x 17 inches in size. Wire hanger on the back. This piece is Ready to hang out of the box! Animaniacs Yakko, Wakko and Dot Warner, also known as "The Warner Brothers (and the Warner Sister)", are the three title cartoon characters featured on the animated series Animaniacs. The trio of red-nosed Warner siblings were considered to be the stars of the ensemble of characters on the show.

They all appear in the Animaniacs logo, and the show usually begins and ends with gags performed by them. The characters are of indeterminate species, being purposely drawn in the style of early black and white cartoons. As with other Animaniacs characters, the Warner siblings were part of a loosely-defined cast of players and often made appearances in other characters' segments, often as a literal running gag, as well as hosting occasional appearances by other characters in their segments. III (born March 11, 1956), sometimes credited as Rob Paulson or "Vocal Magic", is an American voice actor best known as the voice behind "Raphael" from the 1987 cartoon of Teenage Mutant Ninja Turtles, "Yakko Warner" from Animaniacs and "Pinky" from Pinky and the Brain. His role as "Yakko" won him a Daytime Emmy Award for male vocal performance; he won a second one for his portrayal of "Pinky".

In the 1999 animated movie Wakko's Wish, Paulsen provided the voices of Dr. Otto Scratchansniff" and "Yakko Warner. He was also "Prince Eric" in The Little Mermaid II: Return to the Sea.

He plays the new voice of "Teebo" from Star Wars: Ewoks in Walt Disney Pictures' traditional animated film version of Star Tours. (born December 23, 1963) is an American voice actor and singer, who is known for voicing Wakko Warner in Animaniacs, Ironhide in the Transformers film series, Chilly in Doc McStuffins, and Crash Bandicoot in the video game franchise of the same name. Harnell has been the announcer for America's Funniest Home Videos since 1998.