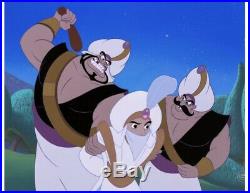 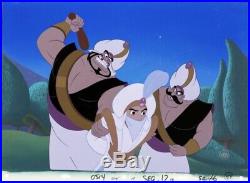 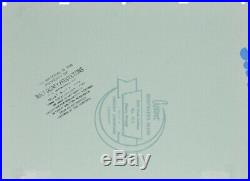 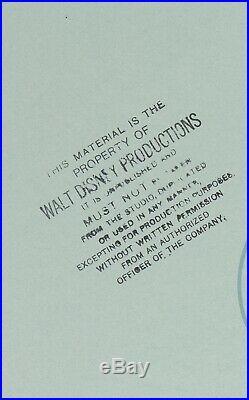 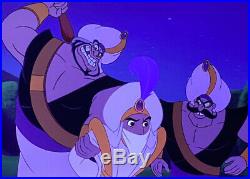 This John Musker and Ron Clemens-directed film was Disney's 31st animated feature and the fourth during the Disney Renaissance. This box office hit spawned a television series, several direct-to-video projects, a Broadway musical play, and a live-action version with Will Smith as the Genie. There were no hand-painted production cels used in the making of this film, so Disney created presentation cels in its Ink and Paint department from the original animation drawings.

This is lot #177 from that sale and features Aladdin as Prince Abubu about to be dropped into the sea by palace guards at the 1:03:00 mark. It's a terrific image featuring the title character at a very dramatic point in the film. The 12" x 11" image is on a 16 field cel with a Disney seal. The background is painted in gouache on background board and marked 0514 SEQ. 16 and bears a Disney Property stamp on the back.

This is the closest you can get to a Key Master production setup from this very popular Disney feature film. Last pic is from the actual scene in the movie! Here at Holy Grail Collectibles we focus on only the rarest items, the best of the best and most sought after collectible Comics, Disney cels and drawings, Art and Memorabilia. Feel free to reach out with any questions or anything I can help with. The item "Aladdin- Aladdin and Guards Presentation Cel on Key Master Production Background" is in sale since Sunday, August 23, 2020.

This item is in the category "Collectibles\Animation Art & Characters\Animation Art\Production Art". The seller is "holygrailcollectibles" and is located in San Francisco, California. This item can be shipped worldwide.