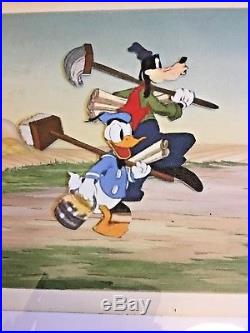 Long (55"x10") Pan Production Background from the Disney short, Bill Posters (1940). In this 7 minute cartoon, Goofy and Donald are thwarted from posting their bills by a headstrong goat. It was directed by Clyde Geronimi who won an Academy Award the following year for best animated short film (Lend a Paw) and years later co-directed Cinderella, Alice in Wonderland, Peter Pan, and Sleeping Beauty. This background is the opening scene of the film and is on screen for 10 seconds. As the camera pans to the right Goofy and Donald come into view whistling "Whistle While You Work, " the song of Snow White fame (and fresh in the minds of the audience who just saw Snow White a couple years earlier). Is in excellent condition and. Is attached to a poster board that protected the art over the years.

Pan backgrounds often were trimmed down or cut up into multiple backgrounds for cels, and few pieces survived intact. Those that did survive are usually creased and in poor shape. This background is in excellent condition and survived the past 80 years relatively unscathed by the ravages of time (likely the piece was never displayed as the colors seem as bright as they do in the cartoon). A matching cutout copy of Goofy and Donald is affixed to the protective cel overlay. Pan Production Background BILL POSTERS (1940) Disney cel Donald Duck Goofy" is in sale since Wednesday, May 9, 2018.

This item is in the category "Collectibles\Animation Art & Characters\Animation Art\Production Art". The seller is "benkin" and is located in Staten Island, New York. This item can be shipped to United States.