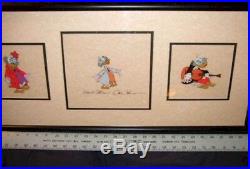 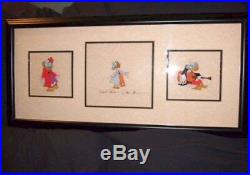 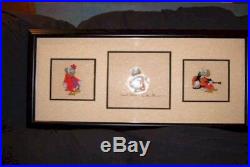 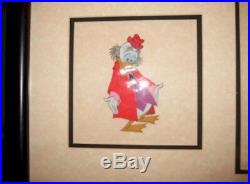 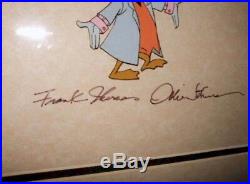 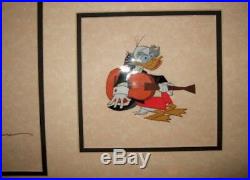 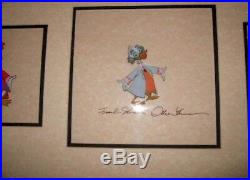 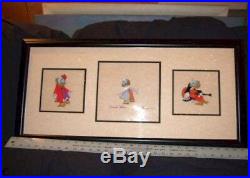 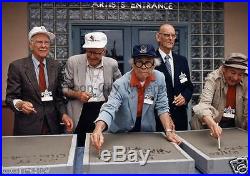 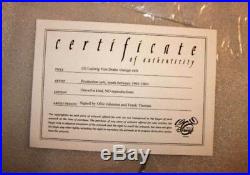 3 Ludwig Von Drake production Cel signed Frank N Ollie 1960's. This listing is for an Amazing Portfolio of Artwork. 3 hand painted production cels from Walt Disney's World of Color TV show during the early 1960s. These 3 cels are all in great condition.

The center piece has been signed by Frank Thomas and Ollie Johnston, who are legendary Disney animator whom work on the show. The piece was framed up for a Gallery Event at the Art of Disney Gallery in the late 1990's. Piece was framed Up by the Gallery and bought directly from the Gallery at Downtown Disney. Comes with a Certificate of Authenticity from the Art of Disney Galler y at Walt Disney World. Frame Size is: 31 x 15 inches. Cel sizes are: 6.5 x 6.5, 8.5 x 9, 6.5 x 6.5 inches. HAND SIGNED BY TWO DISNEY Legends!

2 of Walt Disney's " 9 Old Men ". Ollie Johnston's first major assignment for the Disney company was Pinocchio. Other famous character work includes the centaurettes in Fantasia (1940), Thumper in Bambi (1940), Mr. Smee in Peter Pan (1953), the three good fairies in Sleeping Beauty (1959), Mowgli and Baloo in "The Bare Necessities" sequence of The Jungle Book (1967) and Orville the albatross in The Rescuers (1977).

Johnston was given the Disney Legend Award in 1989. This award was created by Roy E.

Disney to honor individuals whose body of work has made a significant impact on the Disney entertainment legacy. Frank Thomas and Ollie Johnston have co-authored four books about Disney animation and art. Disney Animation: Illusion of Life (1981) is considered a textbook of the art of Disney animation. Too Funny for Words (1987) covers the art of the physical gag in animation.

Walt Disney's Bambi: The Story and the Film (1990) is a record of the making of the classic feature, and The Disney Villain (1994) is the decisive study of animated menace. Ollie passed away on April 14, 2008, thank you is all I can say. Frank Thomas has had a long and distinguished career with Disney.

He is credited with animating Thumper and Bambi on the ice in Bambi (1942), Lady and Tramp eating a romantic spaghetti dinner in Lady and the Tramp (1954), and Mad Madam Mim in the Sword in the Stone (1963). Thomas was given the Disney Legend Award in 1989.