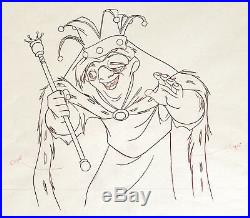 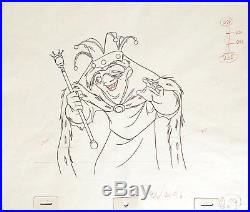 "The Hunchback of Notre Dame" 1996 is an animated musical drama and the 34th full length feature film produced by Walt Disney, and it was released on June 21, 1996 by Buena Vista Pictures. The film was based on the novel of the same name written by Victor Hugo. The story centers around Quasimodo, the deformed bell-ringer of Notre Dame cathedral, and his struggle to gain acceptance into Parisian society. The film was directed by Kirk Wise and Gary Trousdale, music by Alan Menken, songs by Menken and Stephen Schwartz, and stars Tom Hulce as the voice of Quasimodo and Demi Moore as the voice of Esmeralda.

Baxter had worked previously on Who Framed Roger Rabbit? And had assisted in animating Ariel for The Little Mermaid. " He became the supervising animator of Rafiki in "The Lion King" and then the youngest (age 23) Disney supervising animator of a major character when he animated Belle in "Beauty and the Beast. Very few people in history have advanced so quickly and Baxter is an expert in both the technical and artistic aspects of animation. By the time he was in charge of Quasimodo, Baxter had become an extremely skilled and master animator, and his abilities really shine through the character.

Tom Hulce (an American actor, singer, and producer most known for his Academy Award nominated portrayal of Wolfgang Amadeus Mozart in "Amadeus, " 1984) provided the voice of Quasimodo and it was his final theatrical performance before retiring from acting. The character was the third Disney male protagonist to have a single voice actor for both the speaking and singing voices; the others being Beast from "Beauty and the Beast" and John Smith from Pocahontas.

This is a rare and absolutely spectacular original production animation drawing of Quasimodo from the end of the "Topsy Turvy" song sequence. The song was led by Clopin, who is the host of the Festival of Fools event, and at the end of the performance Quasimodo is crowned the King of Fools. In this drawing Quasimodo is eyes and mouth open, wearing the crown, king's robe, and holding the royal sceptre in his right hand. A perfect image and a great addition to any animation art collection! Measurements: Size - Quasimodo: 7 x 6 3/4", Sheet 10 1/2 x 12 1/2".

Condition: See pictures of the actual drawing, which is in excellent overall condition despite a narrow piece of prior framing tape along the very top edge of the sheet as shown by the pictures above! All items we sell are from a smoke-free/mold-free home/workplace and are in excellent condition unless otherwise noted. I own every work pictured for sale and I stand behind every item. Please follow/bookmark me as a favorite and keep checking back for more items for sale in the coming weeks.

For now, please check out my other Animation Drawings and Cels and other original modern and contemporary artwork for sale! The item "1996 VERY RARE DISNEY HUNCHBACK OF NOTRE DAME ORIGINAL PRODUCTION DRAWING CEL" is in sale since Tuesday, April 16, 2019. This item is in the category "Collectibles\Animation Art & Characters\Animation Art\Production Art".