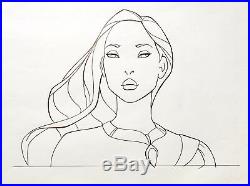 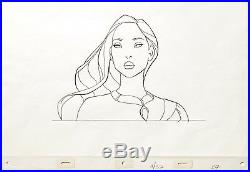 POCAHONTAS PRODUCTION DRAWING WALT DISNEY STUDIOS GRAPHITE & BROWN PENCILS ON PEG HOLE PAPER, 1995. Original production animation drawing of Pocahontas in graphite and brown pencils from "Pocahontas, " 1995, Walt Disney Studios; Numbered 27 lower right; Unframed. Can you sing with all the voices of the mountain? Can you paint with all the colors of the wind? "Pocahontas" 1995 is an animated musical drama and the 33rd full length feature film produced by Walt Disney, and it was released on June 23, 1995 by Buena Vista Pictures.

The film was loosely based on the life of the Native American woman Pocahontas and portrays a fictionalized historical encounter with the Englishman John Smith and the settlers of Jamestown. The film was directed by Mike Gabriel and Eric Goldberg, musical score by Alan Menken, songs by Stephe Schwartz, and stars Irene Bedard as the voice of Pocahontas and Mel Gibson and the voice of John Smith. Supporting casts includes David Ogden Stiers, Russell Means, Christian Bale, Billy Connolly, and Linda Hunt. Pocahontas is the only Disney protagonist to be based on an actual historical figure, rather than a traditional fairy tole or folktale. She is also the only Disney Princess to have a tattoo, which is located around her right bicep. Pocahontas was designed by Glen Keane, who also served as lead animator, and the character was modeled after her Native American voice actress Irene Bedard (along with the historical Pocahontas as well as super models Naomi Campbell and Christy Turlington).

Judy Kuhn provided Pocahontas's singing voice. It is interesting to note that Bedard would go on to portray Pocahontas's mother in the New Line Cinema 2005 film, The New World.

One of the great scenes of the film is when Pocahontas sings "Colors of the Wind;" which explains to one of the new settlers, John Smith, the beauty and importance of the nature and how to show respect for the planet. "Colors of the Wind" was composed by Alan Menken with lyrics by Stephen Schwartz and won the 1995 Oscar for Best Original Song, a Golden Globe in the same category, and the Grammy Award for Best Song Written for a Movie. The song is absolutely beautiful and represents the Native American viewpoint that the Earth is a living entity, and that mankind is connected to everything in nature.

Due to the the song's popularity, many versions exist, it has been covered by multiple artists, and translated into many languages. This is an absolutely spectacular original production animation drawing of Pocahontas from when she first encounters John Smith.

She is a very large nine inches long drawing accomplished in graphite and brown pencils, eyes open, and her hair is blowing in the misty wind. A perfect image and a great addition to any animation art collection! Measurements: Size - Pocahontas: 7 1/4 x 9", Sheet 11 3/4 x 17".

Condition: See pictures below of the actual drawing, which is in excellent overall condition despite a horizontal fold just above the peg holes as shown by the pictures above! All items we sell are from a smoke-free/mold-free home/workplace and are in excellent condition unless otherwise noted.

I own every work pictured for sale and I stand behind every item. Please follow/bookmark me as a favorite and keep checking back for more items for sale in the coming weeks. For now, please check out my other Animation Drawings and Cels and other original modern and contemporary artwork for sale! The item "1995 VERY RARE WALT DISNEY POCAHONTAS ORIGINAL PRODUCTION ANIMATION DRAWING CEL" is in sale since Wednesday, February 6, 2019.