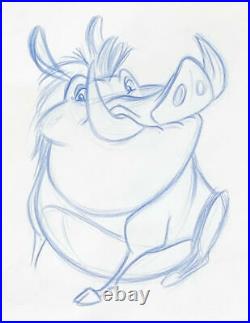 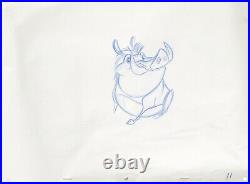 "The Lion King, " 1994 is an animated musical film produced by Walt Disney Feature Animation and released by Walt Disney Pictures. The story centers on an African kingdom of lions, and was derived from William Shakespeare's famous play Hamlet. The film was directed by Roger Allers and Rob Minkoff, produced by Don Hahn, with the screenplay written by Irene Mecchi, Jonathan Roberts, and Linda Woolverton.

Pumbaa, who's lead animator was Tony Bancroft, is a gluttonous warthog and best friends with Timon the meerkat. Most of the animals are wary and dismissive of Pumbaa because of his pungent odor, but he remains a happy-go-lucky guy because of his Hakuna Matata philosophy. Hakuna-matata is a Swahili language phrase from East Africa, meaning "no trouble" or "no worries" and the phrase was adopted for The Lion King. " The music for the song "Hakuna Matata was composed by Elton John, lyrics by Tim Rice, and sung by Timon (voiced by Nathan Lane), Pumbaa (voiced by Ernie Sabella), Young Simba (voiced by Jason Weaver), and Adult Simba (voiced by Joseph Williams).

The song occurs in the film after the death of Simba father, and is about moving on from troubled pasts and forgetting worries. The song also tells the backstory of Pumbaa, explaining how he was ostracized from the other animals because of his flatulence problem; and serves as a vehicle to show Simba growing from lion cub into an adult. "Hakuna Matata" has become one of the most celebrated and popular of all Disney songs, and was nominated for Best Song at the 67th Academy Awards.

It was also ranked in the AFI's list of the 100 best American movie songs of all time, Disney's seventh on the list. This is a very nice and rare original production animation drawing of Pumbaa accomplished in blue pencil. He is one of the most memorable characters in the film and this is a large, full figure image.

Pumbaa is eyes open, and you can see his large warthog tusk. A great piece of Walt Disney animation artwork, perfect for any collection! Measurements: Size - Pumbaa: 6 x 4", Sheet 12 1/2 x 17".

Condition: See pictures of the actual drawing which is in excellent overall condition, despite minor paper warping as shown above! All items we sell are from a smoke-free/mold-free home/workplace and are in excellent condition unless otherwise noted. I own every work pictured for sale and I stand behind every item. Please follow/bookmark me as a favorite and keep checking back for more items for sale in the coming weeks. For now, please check out my other Animation Drawings and Cels and other original modern and contemporary artwork for sale! The item "1994 RARE DISNEY THE LION KING PUMBAA ORIGINAL PRODUCTION ANIMATION DRAWING CEL" is in sale since Thursday, October 22, 2020.