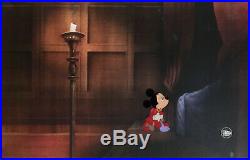 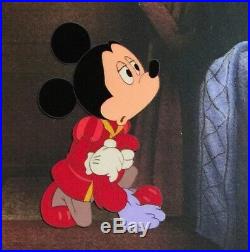 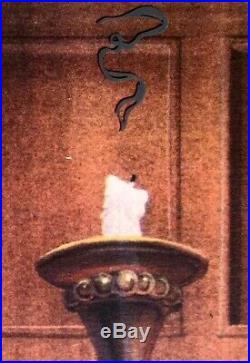 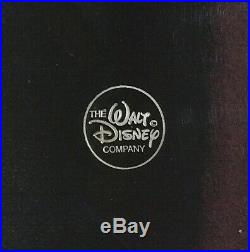 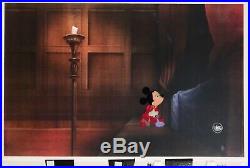 MICKEY MOUSE AND EFFECTS PRODUCTION CELS WALT DISNEY STUDIOS GOUACHE ON CEL, 1990. Original hand painted production animation cels of Mickey Mouse (Pauper) and matching Candle Smoke Effect on a lithographic background from "The Prince and the Pauper, " 1990, Walt Disney Studios; Disney seal lower right; Production numbers in ink lower cel edges; Unframed. Promise me that you will rule the land from your heart, justly and wisely. "The Prince and the Pauper, " 1990 is an animated featurette produced by Walt Disney Feature Animation and it was inspired by Mark Twain's story of the same name. The film was directed by George Scribner and features the voice of Wayne Allwine as Mickey Mouse in both the Prince and Pauper roles. This was Disney's final use of the traditional ink-and-paint camera process. The film was released on November 16, 1990 as a short feature prior to the showing of the newly released feature animated film The Rescuers Down Under. He was married to Russi Taylor, who has been the voice of Minnie Mouse since 1986. Walt Disney was the first voice of Mickey Mouse beginning in 1928, followed by Jimmy MacDonald begining in 1947 until 1977, when Allwine took over the role. After Wayne Allwine death in 2009, the role of Mickey was given to Bret Iwan, who is the currently the official voice of Mickey Mouse. The next three paragraphs is the plot of the featurette and are from Wikipedia. The story begins in England, when a king ruled the country with peace and compassion. However, the good king has fallen ill, and his greedy Captain of the guards, Pete, plunders and terrorizes the country in the king's name. Pluto sees a sausage stand out from the carriage and gives chase, pursuing it into the castle. When Mickey knocks on the door to get his dog back, one of the soldiers opens the door and lets him in, mistaking him for the Prince.

Pete lectures the soldier for letting anyone in, pointing out where the real Prince is: in class with his teacher, Horace Horsecollar and his valet, Donald Duck. The Prince orders them to be brought to him right away.

Pete kicks Mickey through the door, and forces Pluto out of the castle. While in the palace Mickey meets the Prince and they both realize that they are entirely identical in appearance. The Prince reassures the beggar that everything will be fine, and if there are any problems, everyone will recognize the true Prince and the real ring. Disguised as a beggar, the Prince tricks Pete into kicking him out of the palace and meets Goofy and Pluto while Mickey is challenged with the Prince's studies.

The real Prince witnesses a couple of soldiers trying to steal a chicken from Clarabelle Cow and her two children. The children explain that for years the soldiers have taken away their food and belongings in the name of the King. The soldiers attempt to stop the Prince, thinking that he is an imposter, but fail when he escapes with help from the villagers and Goofy. One of the soldiers tells Pete that one of the beggars had the royal ring. Pete is alarmed realizing that he cast out the Prince, and may see the corruption and theft going on outside so Pete plans to make Mickey become the real King so the Prince won't make it back.

The beggar, dressed as the Prince, is called to see his "father, " who is now dying. Mickey enters the room of the dying King and the King tells him he must take his royal birthright and become King. Mickey decides to find the true Prince as quickly as possible, but Pete arrives and blackmails Mickey to be crowned King, or else will kill Pluto. Meanwhile, the true Prince hears the bells announcing the death of his father and realizes that he must return immediately to the palace. Pete captures the Prince and detains him with Donald (whose reasons for imprisonment are unknown), while the coronation begins.

Goofy disguises himself as an executioner, and after accidentally knocking out the guard, the three escape the cell and run to the coronation chamber. While the beggar tries to postpone being crowned by the Archbishop, the Prince arrives and fights Pete who becomes entangled with the soldiers in a fallen chandelier and falls out of a window. Mickey and the Prince the cheer in their success in defeating Captain Pete.

The Archbishop is confused and does not know who to crown, until Pluto recognizes the beggar. The real Prince is crowned King of England, and with Mickey and Goofy at his side, rules for many years with justice and compassion for all. This is an absolutely beautiful original hand painted production animation cel setup from The Prince and the Pauper. " The Mickey Mouse cel occurs in the scene when Pauper Mickey, in the role of the Prince, kneels beside the bed of the gravely-ill King to hear his final words of advice: "You must promise...

Also included in this setup is the candle smoke effect cel from the same scene. This is a great full figure and eyes open image of Mickey Mouse from the last hand painted cel film ever created at Walt Disney Animation Studios.

Condition: See pictures of the actual cels which is in excellent overall condition as shown by the pictures above! All items we sell are from a smoke-free/mold-free home/workplace and are in excellent condition unless otherwise noted. I own every work pictured for sale and I stand behind every item. Please follow/bookmark me as a favorite and keep and keep checking back for more items for sale in the coming weeks. For now, please check out my other Animation Drawings and Cels and other original modern and contemporary artwork for sale! The item "1990 DISNEY PRINCE & PAUPER MICKEY MOUSE ORIGINAL PRODUCTION ANIMATION CEL SETUP" is in sale since Sunday, March 24, 2019. This item is in the category "Collectibles\Animation Art & Characters\Animation Art\Production Art". The seller is "shadowline" and is located in Durham, North Carolina. This item can be shipped worldwide.