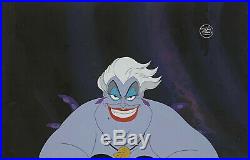 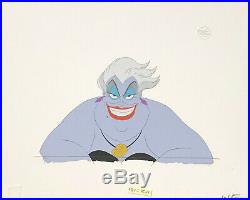 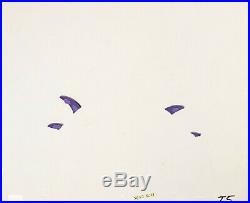 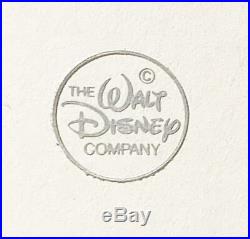 URSULA PRODUCTION CELS WALT DISNEY STUDIOS GOUACHE ON CEL, 1989. Original hand painted matching production animation cels of Ursula and her Tentacles numbered W5 and T5 set on a lithographic background from "The Little Mermaid, " 1989, Walt Disney Studios; Disney seal upper right; Unframed. "She (Ariel) may be the key to Triton's undoing" - Ursula. "The Little Mermaid, " is an American animated musical fantasy film and the 28th film in the Walt Disney Animated Classics series. It was produced by Walt Disney Feature Animation and released by Walt Disney Pictures to theaters on November 17, 1989.

The film was based on the Danish fairy tale of the same name by Hans Christian Andersen, which tells the story of a beautiful mermaid princess who dreams of becoming human. The film was written, directed, and produced by Ron Clements and John Musker; with music by Alan Menken and Howard Ashman.

The first choice to voice the character was Beatrice Arthur who turned down the part. It was eventually accepted by veteran stage actress Elaine Stritch; however she clashed with the music stylist. The voice was finally given to Pat Caroll who described the role as, part Shakespearean actress, with all the flair, flamboyance and theatricality, and part used-car salesman with a touch of con artist. " Although I would have loved to have heard Arthur and Stritch sing "Pour Unfortunate Souls, Ursula is the absolute embodiment of Caroll and I think she was the best choice! The animation of the character was initially offered to Glen Keane, however after hearing Jodi Benson sing "Part of Your World" he wanted to animate Ariel instead and so Ursula ended up going to Disney animator, Ruben Aquino.

Aquino credits Ursula as his favorite character in which he has ever worked and said, When animating Ursula, I was inspired mainly by the voice and by the story sketches, but of course, I also worked very closely with the directors (John Musker and Ron Clements) to realize their vision. Given a great voice, the scenes almost animate themselves, and that definitely was the case with Pat Carroll's amazing vocal performance.

I also did a lot of research on octopus locomotion to make sure Ursula's movements were convincing. This is a matched two cel setup of Ursula's body, and a cel of her tentacles.

This is a wonderful portrait cel setup of Ursula and the cels appear at the end of Ursula's first appearance in the film, when she realizes that Ariel (King Triton's daughter) may be able to be manipulated. The dialog for the cel is below. Measurements: Size - Ursula: 5 1/4 x 8 3/4", Image 8 x 12 3/4". Condition: See pictures of the actual cels, which are in excellent overall condition as shown above! All items we sell are from a smoke-free/mold-free home/workplace and are in excellent condition unless otherwise noted.

I own every work pictured for sale and I stand behind every item. Please follow/bookmark me as a favorite and keep checking back for more items for sale in the coming weeks. For now, please check out my other Animation Drawings and Cels and other original modern and contemporary artwork for sale! The item "1989 WALT DISNEY THE LITTLE MERMAID URSULA ORIGINAL PRODUCTION ANIMATION CEL" is in sale since Monday, August 5, 2019.