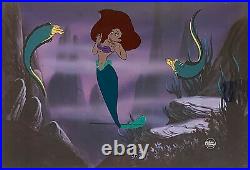 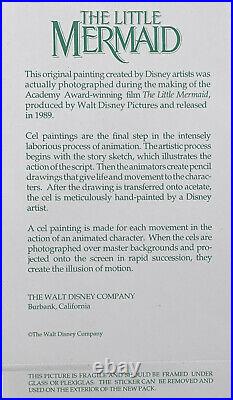 ARIEL AND FLOTSAM & JETSAM PRODUCTION CEL SETUP WALT DISNEY STUDIOS GOUACHE ON CEL, 1989. Original hand painted production animation cels of Ariel and Flotsam & Jetsam; Set on a lithographic background from "The Little Mermaid, " 1989, Walt Disney Studios; Disney seal lower right; Production numbers in ink lower right; With original Walt Disney Certificate of Authenticity; Unframed. Of course, I always was a girl with an eye for a bargain. The daughter of the great sea king is a very precious commodity. "The Little Mermaid, " is an American animated musical fantasy film and the 28th film in the Walt Disney Animated Classics series.

It was produced by Walt Disney Feature Animation and released by Walt Disney Pictures to theaters on November 17, 1989. The film was based on the Danish fairy tale of the same name by Hans Christian Andersen, which tells the story of a beautiful mermaid princess who dreams of becoming human. The film was written, directed, and produced by Ron Clements and John Musker; with music by Alan Menken and Howard Ashman.

The voice cast includes: Jodi Benson, Christopher Daniel Barnes, Pat Carroll, Samuel E. Wright, Jason Marin, Kenneth Mars, Buddy Hackett, and René Auberjonois. Aside from its main animation facility in Glendale, California; Disney opened a satellite feature animation facility in Lake Buena Vista, Florida that was within the Disney-MGM Studios Theme Park at Walt Disney World. Their first projects were to produce an entire Roger Rabbit cartoon short, "Roller Coaster Rabbit, " and to contribute ink and paint support to The Little Mermaid. Another first for Disney films of recent years, was the filming of live actors and actresses for motion reference material for the animators. Broadway actress Jodi Benson (who was predominantly a stage actress when she was cast) was chosen to play Ariel, and Sherri Lynn Stoner, a former member of Los Angeles' Groundlings improvisation comedy group, acted out Ariel's key scenes. The Little Mermaid's supervising animators included Glen Keane and Mark Henn on Ariel, Duncan Marjoribanks on Sebastian, Andreas Deja on King Triton, and Ruben Aquino on Ursula. Originally, Keane had been asked to work on Ursula, as he had established a reputation for drawing large powerful figures, such as the bear in "The Fox and the Hound, " 1981 and Professor Ratigan in "The Great Mouse Detective, " 1986. Keane however, was assigned as one of the two lead artists on the petite Ariel and oversaw the "Part of Your World" musical number. He jokingly stated that his wife looks exactly like Ariel without the fins. " The character's body type and personality were based upon that of Alyssa Milano, who was starring on TV's "Who's the Boss? The effect of Ariel's hair underwater was based on footage of Sally Ride when she was in space; and scenes of Sherri Lynn Stoner in a swimming pool were used in animating Ariel's swimming.

A challenge in animating Ariel were the colors required to show her in various changing environments, both under the sea and on land. By the end of the film, the animators required a total of 32-color models; not including costume changes. The sea-green color of her fin was a hue specially mixed by the Disney paint lab, and the color was named "Ariel" after the character. Flotsam and Jetsam are a pair of slender green moray eels. Their eyes are odd and notable as one is yellow for one and the other opposite is white for the other.

The eels are named after the phrase flotsam and jetsam which means "useless or disregarded objects". Flotsam and Jetsam speak in unison, they finish each other's sentences, and are constantly entwining their bodies. They can also merge their white eyes to form a single crystal ball; which creates a portal through which Ursula can view the outside world while still within her cave. Both eels were both voiced by Paddi Edwards, who also was the voice of Lucy the goose in "One Hundred and One Dalmatians: The Series" and Atropos the Fate in Hercules.

"The Little Mermaid, " 1989 was the final Walt Disney full length feature film that used hand painted animation cels. This is an outstanding original production animation cel setup of Princess Ariel, Flotsam, and Jetsam. The setup is from the end of the film when The Little Mermaid, Ariel is being used as leverage by Ursula as she tries to bargain with King Triton into self sacrifice, after Ariel fulfills her contract with the evil Sea Witch.

This is a very large cel image spanning an incredible seventeen inches long. A absolutely spectacular addition to any animation art collection! Measurements: Size - Ariel and Flotsam & Jetsam: 8 1/4 x 12", Image 11 1/2 x 17". Condition: See pictures of the actual cels which are in excellent overall condition as shown above! All items we sell are from a smoke-free/mold-free home/workplace and are in excellent condition unless otherwise noted. I own every work pictured for sale and I stand behind every item. Please follow/bookmark me as a favorite and keep checking back for more items for sale in the coming weeks. For now, please check out my other Animation Drawings and Cels and other original modern and contemporary artwork for sale! The item "1989 RARE DISNEY THE LITTLE MERMAID ARIEL EELS ORIGINAL PRODUCTION ANIMATION CEL" is in sale since Saturday, June 5, 2021.