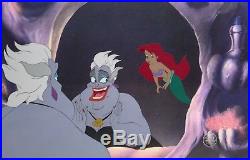 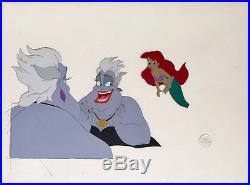 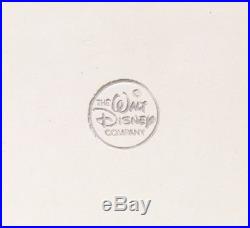 ARIEL & URSULA PRODUCTION CELS WALT DISNEY STUDIOS GOUACHE ON CEL, 1989. Original hand painted production animation cels of Ariel, Ursula, and Ursula's reflection all set on a lithographic background from "The Little Mermaid, " 1989, Walt Disney Studios; Disney seal lower right; Unframed. The only way to get what you want is to become a human yourself.

"The Little Mermaid, " is an American animated musical fantasy film and the 28th film in the Walt Disney Animated Classics series. It was produced by Walt Disney Feature Animation and released by Walt Disney Pictures to theaters on November 17, 1989.

The film was based on the Danish fairy tale of the same name by Hans Christian Andersen, which tells the story of a beautiful mermaid princess who dreams of becoming human. The film was written, directed, and produced by Ron Clements and John Musker; with music by Alan Menken and Howard Ashman. The voice cast includes: Jodi Benson, Christopher Daniel Barnes, Pat Carroll, Samuel E. Wright, Jason Marin, Kenneth Mars, Buddy Hackett, and René Auberjonois.

Aside from its main animation facility in Glendale, California; Disney opened a satellite feature animation facility in Lake Buena Vista, Florida that was within the Disney-MGM Studios Theme Park at Walt Disney World. Their first projects were to produce an entire Roger Rabbit cartoon short, "Roller Coaster Rabbit, " and to contribute ink and paint support to The Little Mermaid. Another first for Disney films of recent years, was the filming of live actors and actresses for motion reference material for the animators.

Broadway actress Jodi Benson (who was predominantly a stage actress when she was cast) was chosen to play Ariel, and Sherri Lynn Stoner, a former member of Los Angeles' Groundlings improvisation comedy group, acted out Ariel's key scenes. The Little Mermaid's supervising animators included Glen Keane and Mark Henn on Ariel, Duncan Marjoribanks on Sebastian, Andreas Deja on King Triton, and Ruben Aquino on Ursula. Originally, Keane had been asked to work on Ursula, as he had established a reputation for drawing large powerful figures, such as the bear in "The Fox and the Hound, " 1981 and Professor Ratigan in "The Great Mouse Detective, " 1986. Keane however, was assigned as one of the two lead artists on the petite Ariel and oversaw the "Part of Your World" musical number.

He jokingly stated that his wife looks exactly like Ariel without the fins. " The character's body type and personality were based upon that of Alyssa Milano, who was starring on TV's "Who's the Boss? The effect of Ariel's hair underwater was based on footage of Sally Ride when she was in space; and scenes of Sherri Lynn Stoner in a swimming pool were used in animating Ariel's swimming.

A challenge in animating Ariel were the colors required to show her in various changing environments, both under the sea and on land. By the end of the film, the animators required a total of 32-color models; not including costume changes. The sea-green color of her fin was a hue specially mixed by the Disney paint lab, and the color was named "Ariel" after the character. "The Little Mermaid, " 1989 was the final Disney film using hand painted animation cels.

Disney Studios, specifically Ron Clements and John Musker, adapted the Hans Christian Anderson story to give the villain a much bigger role. The first choice to voice the character was Beatrice Arthur who turned down the part. It was eventually accepted by veteran stage actress Elaine Stritch; however she clashed with the music stylist. The voice was finally given to Pat Caroll who described the role as, part Shakespearean actress, with all the flair, flamboyance and theatricality, and part used-car salesman with a touch of con artist.

" Although I would have loved to have heard Arthur and Stritch sing "Pour Unfortunate Souls, Ursula is the absolute embodiment of Caroll and I think she was the best choice! The animation of the character was initially offered to Glen Keane, however after hearing Jodi Benson sing "Part of Your World" he wanted to animate Ariel instead and so Ursula ended up going to Disney animator, Ruben Aquino. Aquino credits Ursula as his favorite character in which he has ever worked and said, When animating Ursula, I was inspired mainly by the voice and by the story sketches, but of course, I also worked very closely with the directors (John Musker and Ron Clements) to realize their vision. Given a great voice, the scenes almost animate themselves, and that definitely was the case with Pat Carroll's amazing vocal performance. I also did a lot of research on octopus locomotion to make sure Ursula's movements were convincing.

Ariel: Can you do that? Ursula: My dear sweet child. That's what I do, it's what I live for.

To help unfortunate merfolk like yourself. Poor souls with no one else to turn to. Measurements: Size - Ariel, Ursula, and Ursula's Reflection: 6 x 9 1/4", Image 8 1/4 x 12". Condition: See pictures below of the actual cels, which are in excellent overall condition, as shown by the pictures below! All items we sell are from a smoke-free/mold-free home/workplace and are in excellent condition unless otherwise noted.

The item "1989 DISNEY THE LITTLE MERMAID ARIEL & URSULA ORIGINAL PRODUCTION ANIMATION CELS" is in sale since Wednesday, March 28, 2018. This item is in the category "Collectibles\Animation Art & Characters\Animation Art\Production Art". The seller is "shadowline" and is located in Durham, North Carolina. This item can be shipped worldwide.