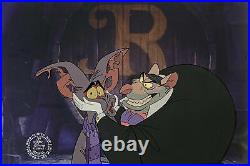 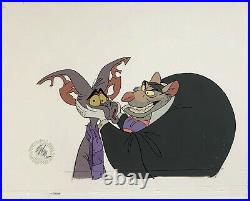 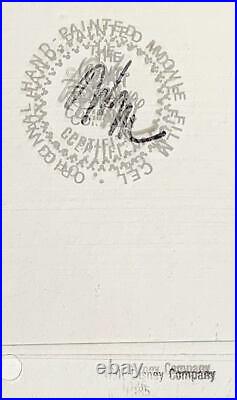 PROFESSOR RATIGAN & FIDGET PRODUCTION CEL WALT DISNEY STUDIOS GOUACHE ON CEL, 1986. Original hand painted production animation cel of Professor Ratigan and Fidget set on a lithographic background from "The Great Mouse Detective, " 1986, Walt Disney Studios; Walt Disney Seal lower left; Unframed. Oh I love it when I'm nasty. Eve Titus wrote a series of stories about Basil of Baker Street; a mouse that lived next door to Sherlock Holmes and who shared many of his skills and traits. Walt Disney Studios adapted the Titus stories into a wonderful feature film that was still able to maintain the Arthur Conan Doyle's Sherlock Holmes characters, even though they were transformed into a mouse world. The resulting film "The Great Mouse Detective" was directed by Ron Clements, music by Henry Mancini, and was released on July 2, 1986. Professor Ratigan was designed and animated by Walt Disney master animator, Glen Keane. The inspiration for the character was Professor James Moriarty, the nemesis to Sherlock Holmes in the series of stories written by Sir Arthur Conan Doyle. Ratigan was voiced by veteran Hollywood actor Vincent Price, who stated it was his favorite role because he had two songs written for him, "The World's Greatest Criminal Mind, " and Goodbye, So Soon. In the following paragraph Ratigan explains his scheme to his henchmen.

My friends, we are about to embark on the most odious, the most evil, the most diabolical scheme of my illustrious career. A crime to top all crimes. A crime that will live in infamy! Tomorrow evening, our beloved monarch celebrates her Diamond Jubilee and, with the enthusiastic help of our good friend, Mr. Flaversham, it promises to be a night she will never forget!

Her last night, and my first, as supreme leader of all Mousedom! Fidget, the peg legged and one wing crippled bat, is the right hand henchman to Professor Ratigan. Glen Keane was responsible for the character design of Fidget; and he was voiced by Candy Candido, the veteran radio performer who also had a long career at Walt Disney Studios. Candido portrayed the Indian Chief in Peter Pan , one of Maleficent's goons in Sleeping Beauty , the Alligator Captain of the Guard in Robin Hood , Brutus and Nero in The Rescuers , the deep voiced escaped convict (Gus) in the Haunted Mansion attraction, and of course Fidget the peg-legged bat that would be his final role before his death.

Since Candido normally has a deep, croaky voice; his voice track had to be digitally sped up in order for Fidget to sound high-pitched. This is a wonderful original production animation cel the wicked Professor Ratigan and his bat sidekick Fidget.

Poor Fidget was almost eaten by Ratigan's pet cat Felicia, but Ratigan saved him just in time to assist in a plan to ambush Basil. This is a very large image of the dastardly duo and would make a great addition to any animation art collection! Measurements: Size - Professor Ratigan & Fidget: 7 x 12 1/2"; Image: 10" x 15 1/4. Condition: See pictures of the actual cel, which is in excellent overall condition as shown above! All items we sell are from a smoke-free/mold-free home/workplace and are in excellent condition unless otherwise noted.

For now, please check out my other Drawings and Cels and other original modern and contemporary artwork for sale! The item "1986 WALT DISNEY GREAT MOUSE DETECTIVE RATIGAN FIDGET ORIGINAL PRODUCTION CEL" is in sale since Thursday, October 1, 2020. This item is in the category "Collectibles\Animation Art & Characters\Animation Art\Production Art". The seller is "shadowline" and is located in Durham, North Carolina. This item can be shipped worldwide.