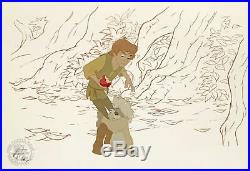 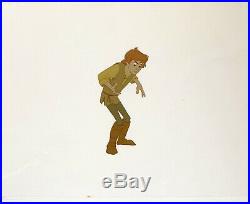 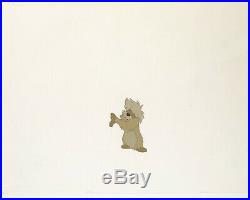 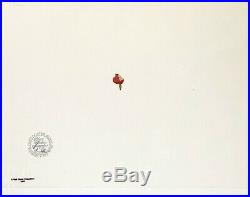 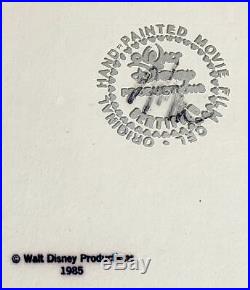 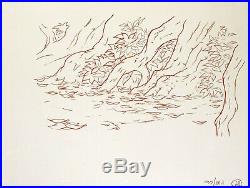 TARAN, GURGI, AND APPLE PRODUCTION CELS WALT DISNEY STUDIOS GOUACHE ON CEL, 1985. "The Black Cauldron, " 1985 is an animated feature film produced by Walt Disney Feature Animation in association with Silver Screen Partners II, and released by Walt Disney Pictures. It was the 25the Disney feature film and is loosely based on the first two books in "The Chronicles of Prydain" by Lloyd Alexander. The film was directed by Ted Berman and Richard Rich and was the first Disney animated film to be recorded in Dolby Stereo.

It feature the voices talents of Grant Bardsley, Susan Sheridan, Freddie Jones, Nigel Hawthorne, John Byner, and John Hurt. The film was not released on home video until 1998.

The next four paragraphs is the plot of the film and are from Wikipedia. "In the land of Prydain, Taran is an "assistant pig-keeper on the small farm of Caer Dallben, home of Dallben the Enchanter. Dallben learns that the Horned King is searching for a mystical relic known as the Black Cauldron, which is capable of creating an invincible army of undead warriors, the Cauldron-Born.

Dallben fears the Horned King may try to steal his pig Hen Wen, which has oracular powers, and use her to locate the cauldron. Dallben directs Taran to take Hen Wen to safety; unfortunately, Taran's foolish daydreaming causes Hen Wen to be captured by the Horned King's forces. Taran follows them to the Horned King's stronghold. Along the way, he encounters the small pestering companion Gurgi, who joins Taran on his search.

Frustrated by Gurgi's antics, Taran leaves the former to sneak into the castle and rescues Hen Wen, but although Hen Wen escapes from the castle, Taran is arrested and thrown into the dungeon. A fellow captive named Princess Eilonwy frees Taran as she is trying to make her own escape. In the catacombs beneath the castle, Taran and Eilonwy discover the ancient burial chamber of a king, where Taran arms himself with the King's sword. It contains magic that allows him effectively to fight the Horned King's minions and so to fulfill his dream of heroism.

Along with a third prisoner, the comical, middle-aged bard Fflewddur Fflam, they escape from the castle and are soon reunited with Gurgi. Upon discovering that Taran has escaped, the Horned King order his dwarf companion Creeper to send the Gwythaints to follow Taran and bring him back alive.

Following Hen Wen's trail, the four stumble into the underground kingdom of the Fair Folk who reveal that Hen Wen is under their protection. When the cheerful, elderly King Eidilleg reveals that he knows where the cauldron is, Taran resolves to go destroy it himself. Eilonwy, Fflewddur, and Gurgi agree to join him and Eidilleg's obnoxious right-hand man Doli is assigned to lead them to the Marshes of Morva while the Fair Folk agree to escort Hen Wen safely back to Caer Dallben. At the marshes they learn that the cauldron is held by three witches - the grasping Orddu, who acts as leader: the greedy Orgoch; and the more benevolent Orwen, who falls is love with Fflewddur at first sight, which causes a frightened Doli to abandon the group.

Orddu agrees to trade the cauldron for Taran's sword, and he reluctantly agrees, although he knows that to yield it will cost his chance for heroism. Before vanishing, the witches reveal that the cauldron is indestructible, and that its power can only be broken by someone who climbs in under his own free will, which will kill him.

The three witches come to recover the now-inert Black Cauldron. Fflewddur challenges the reluctant witches to demonstrate their powers by the revival, and upon hearing Fflewddur's remarks, the witches honor the request, restoring Gurgi back to life. After Gurgi is resurrected, he pushes Taran and Eilonwy into a kiss. The four friends then journey back to Caer Dallben where Dallben and Doli watch them in a vision created by Hen Wen, and Dallben finally praises Taran for his heroism despite the fact that he prefers to be a Pig-Boy.

Measurements: Size - Taran & Gurgi: 6 1/2 x 3", Image 9 1/2 x 15". Condition: See pictures of the actual cels, which is in excellent overall condition as shown by the pictures above! All items we sell are from a smoke-free/mold-free home/workplace and are in excellent condition unless otherwise noted. I own every work pictured for sale and I stand behind every item. Please follow/bookmark me as a favorite and keep checking back for more items for sale in the coming weeks.

For now, please check out my other Drawings and Cels and other original modern and contemporary artwork for sale! The item "1985 DISNEY THE BLACK CAULDRON TARAN GURGI ORIGINAL PRODUCTION ANIMATION CEL" is in sale since Saturday, March 30, 2019. This item is in the category "Collectibles\Animation Art & Characters\Animation Art\Production Art".