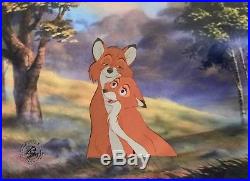 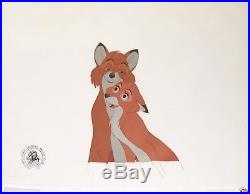 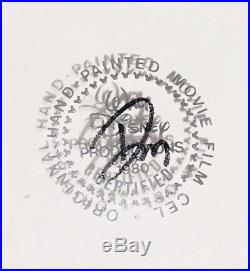 TOD AND VIXEY PRODUCTION CEL WALT DISNEY STUDIOS GOUACHE ON CEL, 1981. Original hand painted production animation cel of Tod and Vixey from "The Fox and the Hound, " 1981, Walt Disney Studios; Set on lithographic background; Numbered 81 in ink lower right; Walt Disney seal lower left; Unframed. And, now, that is a natural fact. Cause when you be yourself. You're gonna be appreciated right back - Big Mama.

"The Fox and the Hound, " 1981 is the 24th animated feature film produced by Walt Disney Productions and it was loosely based on the novel, of the same name, by Daniel P. The film tells the story of two unlikely friends, a red fox named Tod and a hound dog named Copper. The story centers on the two main character's struggle to preserve their friendship, as their emerging instincts and surrounding social pressures begin to force them to become adversaries. The film was directed by Ted Berman, Richard Rich, and Art Stevens; and features the voice talents of Mickey Rooney, Kurt Russell, Pearl Bailey, Jack Albertson, Sandy Duncan, Jeanette Nolan, Pat Buttram, John Fiedler, John McIntire, Dick Bakalyan, Paul Winchell, Keith Mitchell, and Corey Feldman. The story begins with Tod, an orphaned red fox who's mother was shot by a hunter not long after leaving him by a fence post.

An owl, Big Mama, feels sorry for the little fox; and with the help of Dinky and Boomer (a sparrow and a woodpecker) they eventually get the Widow Tweed to adopt the young orphan. Tod befriends a young coonhound dog named Copper, who is supposed to be his sworn enemy; however they soon become inseparable best friends.

One day Copper is sent off on a hunting trip and is taught how to be a true hunting dog. This is sad news for Tod, and one day the old Irish Wolfhound hunting dog Chief attacks Tod. Copper saves him from being killed and Tod escapes, but Chief ends up getting severely hurt during the attack.

Copper becomes angry and decides to go on the hunt for Tod. During the hunt, Tod and his new female fox friend Vixey, are able to evade Copper and the hunter Amos Slade. But when the two hunters encounter a bear, Tod is torn between running away or risking his life to save his old best friend. Tod decides to intervene, but falls down a waterfall and is badly hurt. Amos Slade tries to take advantage of the wounded fox, but Copper stands in front of him and preventing Slade from firing a shot.

In the end, their friendship is repaired and they are again best friends. Tod was animated by Ollie Johnston, Don Bluth, Mark Henn, Dan Haskett, John Lasseter, and John Musker; and was voiced by Keith Coogan (fox pup) and Mickey Rooney (adult fox). Vixey was Glen Keane and Mark Henn and voiced by the American singer, dancer, comedian, and actress Sandy Duncan. This is an absolutely beautiful original hand painted production animation cel of Tod and Vixey. After Vixey and Tod have a fight, this cel appears in the scene when Big Moma (voiced by Pearl Bailey) sings the song Appreciate the Lady.

This allows Todd to be himself and for Vixey to give him another chance, after Tod was not able to catch a fish on his own. This is a great eyes open image of both characters, a stand out piece of animation artwork, and is a perfect addition for any collection!

Measurements: Size - Tod & Vixey: 7 1/2 x 5 3/4", Image 11 1/2 x 15 1/2". Condition: See pictures below of the actual cel, which is in excellent overall condition as shown by the pictures below! All items we sell are from a smoke-free/mold-free home/workplace and are in excellent condition unless otherwise noted.

The item "1981 DISNEY THE FOX AND THE HOUND TOD & VIXEY ORIGINAL PRODUCTION ANIMATION CEL" is in sale since Sunday, September 23, 2018. This item is in the category "Collectibles\Animation Art & Characters\Animation Art\Production Art". The seller is "shadowline" and is located in Durham, North Carolina. This item can be shipped worldwide.