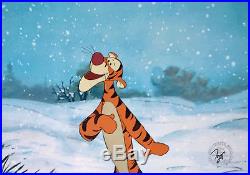 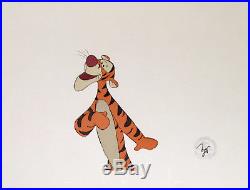 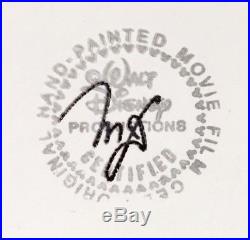 TIGGER PRODUCTION CEL WALT DISNEY STUDIOS GOUACHE ON CEL, 1974. Original hand painted production animation cel of Tigger set on a lithographic background from "Winnie The Pooh and Tigger Too, " 1974; Walt Disney Studios; Walt Disney Seal lower right; Unframed. "The Many Adventures of Winnie The Pooh, " 1977 was composed of a series of featurettes Disney produced based upon the Winnie-the-Pooh books by A. Walt Disney wanted to introduce the public to the Pooh characters slowly over time and the released featurettes include, "Winnie the Pooh and the Honey Tree, " 1966, Winnie the Pooh and the Blustery Day.

" 1968, and "Winnie the Pooh and Tigger Too, 1974. For the full length film in 1977, extra material was added and used to link the three featurettes together. A fourth, shorter featurette was added at the end of the film and was based on the final chapter of The House at Pooh Corner. Wolfgang Reitherman began working for Walt Disney in 1934, along with future Disney legends Ward Kimball and Milt Kahl.

The three worked together on a number of early classic Disney shorts and Reitherman worked on Disney feature films produced from 1937 to 1981, including "Snow White and the Seven Dwarfs" (animating the Slave in the Magic Mirror) up to "The Fox and the Hound, " where he served as the co-producer for the film. Beginning with 1961's "One Hundred and One Dalmatians, " "Woolie" (as he was called by friends) served as Disney's chief animation director. One of Reitherman's productions, the 1968 short "Winnie the Pooh and the Blustery Day, " won the Academy Award for Best Animated Short Film. In addition, all three of Reitherman's sons Bruce, Richard, and Robert provided voices for Disney characters. Bruce Reitherman was the voice for Christopher Robin in Winnie the Pooh and the Honey Tree.

Winnie The Pooh was animated by veteran Walt Disney animators Frank Thomas and Ollie Johnston and was voiced by Sterling Holloway. Halloway had a long and distinguished career with Disney and not only provided the voice for Winnie The Pooh, but the Cheshire Cat from "Alice In Wonderland, " Kaa from "The Jungle Book, " Roquefort from "The Aristocats, " and many more characters! Rabbit was animated by the great Don Bluth and was voiced by Junius Matthews; a veteran radio actor who also voiced the owl Archimedes in the Disney film "The Sword In The Stone, " 1963.

Measurements: Size - Tigger: 8 x 5 1/2", Image 10 3/4 x 15". Condition: See pictures below of the actual cel, which is in excellent overall condition as shown by the pictures below!

The item "1974 RARE WALT DISNEY WINNIE THE POOH TIGGER ORIGINAL PRODUCTION ANIMATION CEL" is in sale since Saturday, November 10, 2018. This item is in the category "Collectibles\Animation Art & Characters\Animation Art\Production Art". The seller is "shadowline" and is located in Durham, North Carolina. This item can be shipped worldwide.