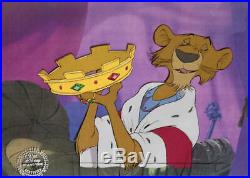 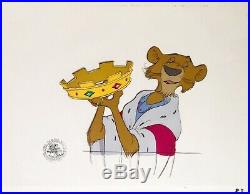 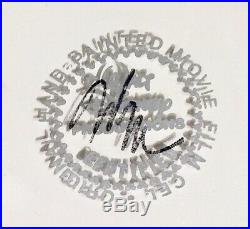 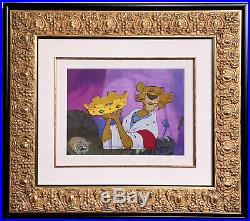 PRINCE JOHN PRODUCTION CEL WALT DISNEY STUDIOS GOUACHE ON CEL, 1973. Original hand painted production animation cel of Prince John from "Robin Hood, " 1973, Walt Disney Studios; Walt Disney seal lower left; Set on a lithographic background; Numbered 83 in ink lower right; Framed with a black and gold wood frame, gold wood fillet, two acid free linen mats, and UV conservation clear glass. To coin a phrase, my dear counselor, rob the poor to feed the rich. The history of Robin Hood is that he is a heroic outlaw from English folklore who, according to legend, was a highly skilled archer and swordsman. He is usually depicted dressed in green, leads a band of Merry Men, and his motto is robbing from the rich and giving to the poor.

Robin Hood has became a popular folk figure, with ballads dating back to as early as the 15th century. "Robin Hood" was the twenty-first full length animated film released by Walt Disney Studios on November 8, 1973. Robin Hood is an anthropomorphic fox and the protagonist of the film. All the characters in Disney's version of "Robin Hood" were played by animals.

Sir Hiss was voiced by Terry-Thomas (who's hissing speech was masterful), and both were animated by Ollie Johnston. The on-screen presence of the two together is just wonderful and Johnston's animation skills, at this point, are top notch! The personalities are different and distinct, as are the ways the two different characters move and interact. Kaa from a prior film "Jungle Book, " 1967 must have been a nice starting point, in order to allow Sir Hiss to show more emotion and expression through the use of not only his face and head, but his tail.

This is a wonderful original production cel of Prince John talking to Sir Hiss. They are on their way to Nottingham and discussing the issue of taxing the poor, and Prince John says, To coin a phrase, my dear counselor, rob the poor to feed the rich. " Prince John while holding his crown in his paws says to Sir Hiss, "Tell me, ah what is the next stop, ah Sir Hiss? A spectacular eyes and mouth open hand painted animation cel of the primary villain of the film, and a great addition to any animation art collection!

Measurements: Size - Prince John: 6 3/4 x 9 1/4", Image 9 x 12", Frame 22 x 25. Condition: See pictures below of the actual cel, which is in excellent overall condition as shown above! All items we sell are from a smoke-free/mold-free home/workplace and are in excellent condition unless otherwise noted.

The item "1973 WALT DISNEY ROBIN HOOD PRINCE JOHN ORIGINAL PRODUCTION ANIMATION CEL FRAMED" is in sale since Wednesday, November 13, 2019. This item is in the category "Collectibles\Animation Art & Characters\Animation Art\Production Art". The seller is "shadowline" and is located in Durham, North Carolina. This item can be shipped worldwide.