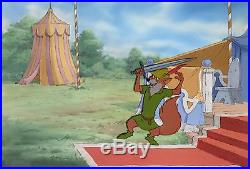 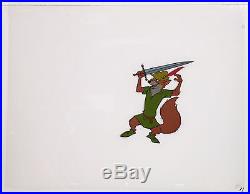 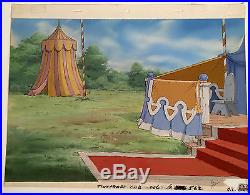 After "Sleeping Beauty, " 1959, there was no longer hand inking of the lines on the tops of the cel; rather this was done by a process called xerography. Such is the case for not only this full figure cel of Robin Hood, but also for this background.

The background is an original hand painted watercolor background, but in addition there is the original production line overlay cel; which contains all the black outlines for the background's various features and objects. The line overlay cel was created through xerography and allows for much more detail for example; the trees and grass now contain black line highlights for branches, leaves, and both clumps and individual blades of grass. The tent and Prince John's viewing platform are also highlighted with black lines to showcase fabrics as well as the wood planks making up the stage's floor.

The resulting work of art is a very large and wonderful animation set-up showcasing the great animators attention to every detail. Robin Hood was animated by the veteran Disney animator Ollie Johnston and he was voiced by the English actor Brian Bedford.

Not only is Robin Hood an expert archer but a very skilled swordsman. In this cel, Robin is wearing his classic green tunic, yellow hat with red feather, and his green boots.

Production cels of this quality are rare, and this one is quite nice as Robin Hood is full figure with his eyes and mouth open, and is brandishing a sword preparing to engage the Rhino Guards of Prince John! In addition, the cel is placed on a hand painted master production background with it's matching production line overlay cel.

Production backgrounds are even rarer than cels and this background is a beautifully painted scene, that is instantly recognized as being from the Walt Disney film Robin Hood. An absolutely spectacular piece of Walt Disney animation artwork, perfect for any collection! Measurements: Size - Robin Hood 5 1/2 x 4 3/4", Image 11 x 16", Background 12 1/2 x 16. Condition: See pictures below of the actual cels and background, which are in excellent overall condition as shown by the pictures below! All items we sell are from a smoke-free/mold-free home/workplace and are in excellent condition unless otherwise noted.

For now, please check out my other Drawings and Cels and other original modern and contemporary artwork for sale! The item "1973 RARE WALT DISNEY ROBIN HOOD ORIGINAL PRODUCTION ANIMATION CEL & BACKGROUND" is in sale since Tuesday, February 13, 2018. This item is in the category "Collectibles\Animation Art & Characters\Animation Art\Production Art". The seller is "shadowline" and is located in Durham, North Carolina.