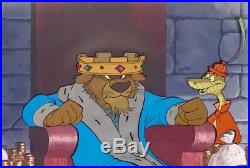 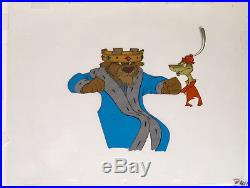 "Robin Hood" was the twenty-first full length animated film released by Walt Disney Studios on November 8, 1973. Robin Hood is an anthropomorphic fox and the protagonist of the film.

All the characters in Disney's version of "Robin Hood" were played by animals. Prince John was a lion, Sir Hiss (no surprise) was a snake, and the Sheriff of Nottingham was a wolf. Prince John was voiced by the great and deep voiced Peter Ustinov, Sir Hiss by Terry-Thomas (who's hissing speech was masterful), and both were animated by Ollie Johnston. The on-screen presence of the two together is just wonderful and Johnston's animation skills, at this point, are top notch! The personalities are different and distinct, as are the ways the two different characters move and interact. Kaa from a prior film "Jungle Book" must have been a nice starting point in order to allow Sir Hiss to show more emotion and expression. Measurements: Size - Prince John: 4 3/4 x 7 1/2", Sir Hiss: 5 1/4 x 2 1/4", Image 7 1/4 x 10 1/2.

The item "1973 DISNEY ROBIN HOOD PRINCE JOHN SIR HISS ORIGINAL PRODUCTION ANIMATION CEL" is in sale since Saturday, November 10, 2018. This item is in the category "Collectibles\Animation Art & Characters\Animation Art\Production Art". The seller is "shadowline" and is located in Durham, North Carolina.