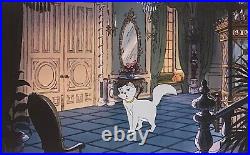 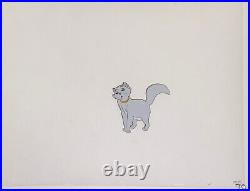 Your eyes ARE like sapphires. Thomas O'Malley speaking to Duchess. "The Aristocats, " 1970 is an animated feature film produced and released by Walt Disney Productions.

This was the last film project to be approved by Walt Disney himself, as he died in late 1966, before the film was finally released to theaters by Buena Vista Distribution on December 11, 1970. "The Aristocats" featured the voice talent of Eva Gabor, Hermione Baddeley, Phil Harris, Dean Clark, Sterling Holloway, Scatman Crothers, and Roddy Maude-Roxby. The film is based on a story by Tom McGowan and Tom Rowe, and centers around a family of aristocratic cats.

Duchess is a long-haired purebred white Turkish Angora cat with blue eyes (shining like sapphires) and wearing a gold and jeweled collar that is studded with diamonds. She is the mother of three kittens; Marie, Berlioz, and Toulouse and her owner is the aristocratic Madame Adelaide Bonfamille.

Duchess was voiced by Eva Gabor who was a Hungarian-born American socialite and actress. Robie Lester who was an American Grammy-nominated voice artist and singer, provided the singing voice for Duchess. According to veteran Walt Disney animator Andreas Deja: Duchess was animated by quite a few artists, I would say that Ollie Johnston did some of the nicest scenes, educating the kittens etc.. Frank Thomas came up with good acting scenes as well, when Duchess meets O'Malley for the first time, and when she says goodbye to him at the end of the movie. Milt Kahl set her basic design based on Ken Anderson's drawings. Abraham DeLacey Giuseppe Casey Thomas O'Malley (simply known as Thomas O'Malley) the alley cat was also animated by Ollie Johnston and Milt Kahl. O'Malley was marvelously voiced by Phil Harris, who was an American singer, songwriter, jazz musician, actor, and comedian. Harris also worked as a voice actor for two other Walt Disney animated feature films: "The Jungle Book, " 1967 as Baloo the Bear and "Robin Hood, " 1973 as Little John (another bear). This is an absolutely spectacular original production cel of Duchess.

She is full figure, with both her sapphire blue eyes and mouth open. A beautiful image of Duchess and a great addition to any animation art collection! Measurements: Size - Duchess: 3 1/4 x 3 1/2", Image 10 x 15 1/2". Condition: See pictures of the actual cel which is in excellent overall condition as shown above! All items we sell are from a smoke-free/mold-free home/workplace and are in excellent condition unless otherwise noted.

I own every work pictured for sale and I stand behind every item. Please follow/bookmark me as a favorite and keep checking back for more items for sale in the coming weeks. For now, please check out my other Animation Drawings and Cels and other original modern and contemporary artwork for sale! This item is in the category "Collectibles\Animation Art & Merchandise\Animation Art". The seller is "shadowline" and is located in this country: US.