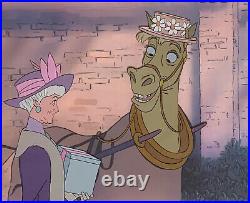 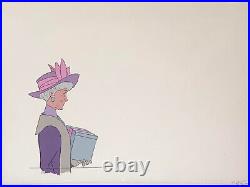 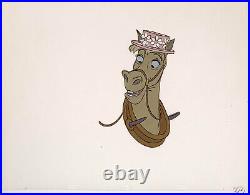 MADAME ADELAIDE BONFAMILLE & FROU-FROU PRODUCTION CELS WALT DISNEY STUDIOS GOUACHE ON CEL, 1970. Original hand painted production animation cels of Madame Adelaide Bonfamille and Frou-Frou from "The Aristocats, " 1970; Walt Disney Studios; Numbered 225 and 47 in ink lower right; Set on a lithographic background; Unframed. Of course, Frou-Frou, I almost forgot. "The Aristocats, " 1970 is an animated feature film produced and released by Walt Disney Productions. This was the last film project to be approved by Walt Disney himself, as he died in late 1966, before the film was finally released to theaters by Buena Vista Distribution on December 11, 1970. "The Aristocats" featured the voice talent of Eva Gabor, Hermione Baddeley, Phil Harris, Dean Clark, Sterling Holloway, Scatman Crothers, and Roddy Maude-Roxby. The film is based on a story by Tom McGowan and Tom Rowe, and centers around a family of aristocratic cats. Duchess is a long-haired purebred white Turkish Angora cat with blue eyes (shining like sapphires) and wearing a gold and jeweled collar that is studded with diamonds. She is the mother of three kittens; Marie, Berlioz, and Toulouse and her owner is the aristocratic Madame Adelaide Bonfamille. Duchess was voiced by Eva Gabor who was a Hungarian-born American socialite and actress. Robie Lester who was an American Grammy-nominated voice artist and singer, provided the singing voice for Duchess. According to veteran Walt Disney animator Andreas Deja: Duchess was animated by quite a few artists, I would say that Ollie Johnston did some of the nicest scenes, educating the kittens etc.. Frank Thomas came up with good acting scenes as well, when Duchess meets O'Malley for the first time, and when she says goodbye to him at the end of the movie. Milt Kahl set her basic design based on Ken Anderson's drawings. Madame Adelaide Bonfamille, also called Madame, is an elderly wealthy woman who apparently was a famous opera singer (she said that she once played the title character of George Bizet's Carmen, and was even seen dancing to the aria "Habanera"). She is also the owner of Duchess, a white Turkish Angora cat; along with her three kittens Marie, Berlioz, and Toulouse. Madame was voiced by the actress Hermione Baddeley, who also played a maid in the Walt Disney feature film Mary Poppins. Grace Godino was the live action model for Madame Bonfamille. Grace was an inker at the Walt Disney Paint and Ink Department and, at one point, was a stand-in for Rita Hayworth. A bit of trivia: the name "Bonfamille" is derived from the French phrase for "good family" ("bon" being the masculine word for "good" and "famille" meaning "family"). According to veteran Walt Disney animator Andreas Deja.

Here is another character Milt Kahl didn't particularly enjoy animating, but as usual he pulled it off beautifully. There was criticism at the time as to why Madame Bonfamille in "The Aristocats" looked so realistic.

This lady was eccentric enough to will her fortune to her house cats, so why not design her as a nutty old woman? Milt's response was that the story guys thought of her as a beautiful, dignified elderly lady, as did Ken Anderson. So he refined what they gave him, not changing the character's concept.

In an interview Milt said that it doesn't hurt to do your straight, realistic job once in a while, knowing that you will have other characters in the picture who are eccentric and more entertaining. Realism is not the problem, it's the way (other) people do realism that's a problem!

Frou-Frou is a brown horse, wearing a pink hat with a circle of daisies at the brim, of Madame Bonfamille and a close friend of Duchess and her three kittens. In the beginning of the film, Frou-Frou gives Madame, Duchess, and the kittens a ride back home from town.

During which, she allows Berlioz to ride on her back, and when they all arrive back at their mansion, Madame says "Of course, Frou-Frou, I almost forgot, " and gives her a treat from the palm of her hand. Frou-Frou was voiced by Nancy Kulp and her singing voice was provided by Ruth Buzzie. Nancy Kulp is most know for her portrayal of Jane Hathaway in "The Beverly Hillbillies, " and Ruth Buzzie is most associated with her various roles in the cast of Rowan and Martin's Laugh-In.

This is an absolutely fantastic two cel setup of Madame Adelaide Bonfamille and Frou-Frou. The cels appear at the very beginning of the film as Madame, with a blue wrapped package in hand, comes up to Frou-Frou to give her a treat from the palm or her hand. This is a beautiful image from "The Aristocats" and a great addition to any animation art collection! The dialog for the scene is below.

Measurements: Size - Madame Adelaide Bonfamille & Frou-Frou: 9 x 9 1/2", Image 9 1/2 x 12". Condition: See pictures of the actual cels which are in excellent overall condition as shown above! All items we sell are from a smoke-free/mold-free home/workplace and are in excellent condition unless otherwise noted. I own every work pictured for sale and I stand behind every item.

Please follow/bookmark me as a favorite and keep checking back for more items for sale in the coming weeks. For now, please check out my other Animation Drawings and Cels and other original modern and contemporary artwork for sale! This item is in the category "Collectibles\Animation Art & Merchandise\Animation Art".