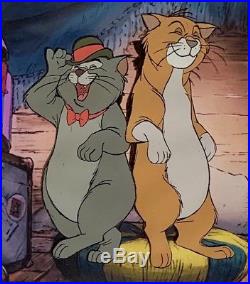 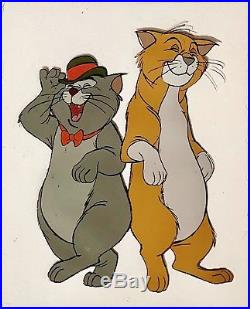 THOMAS O'MALLEY AND SCAT CAT PRODUCTION CEL WALT DISNEY STUDIOS GOUACHE ON CEL, 1970. Original hand painted production animation cel of Thomas O'Malley and Scat Cat from "The Aristocats, " 1970; Walt Disney Studios; Set over a lithographic background; Unframed. Everybody wants to be a cat. Because a cat's the only cat, who knows where it's at. "The Aristocats, " 1970 is an animated feature film produced and released by Walt Disney Productions.

This was the last film project to be approved by Walt Disney himself, as he died in late 1966, before the film was finally released to theaters by Buena Vista Distribution on December 11, 1970. "The Aristocats" featured the voice talent of Eva Gabor, Hermione Baddeley, Phil Harris, Dean Clark, Sterling Holloway, Scatman Crothers, and Roddy Maude-Roxby. The film is based on a story by Tom McGowan and Tom Rowe, and centers around a family of aristocratic cats. Abraham DeLacey Giuseppe Casey Thomas O'Malley (simply known as Thomas O'Malley) the alley cat was also animated by Ollie Johnston and Milt Kahl. O'Malley was marvelously voiced by Phil Harris, who was an American singer, songwriter, jazz musician, actor, and comedian. Harris also worked as a voice actor for two other Walt Disney animated feature films: "The Jungle Book, " 1967 as Baloo the Bear and "Robin Hood, " 1973 as Little John (another bear). Scat Cat was originally named Satchmo Cat and was intended to be voiced by Louis Armstrong; unfortunately he became ill and was unable to follow through with the project. The replacement was Scatman Crothers, the character was renamed Scat Cat, and the song "Everybody Wants To Be A Cat" was written for him. It is worth noting that Scat Cat still retains the Louis Armstrong musical instrument of choice, the trumpet.

The song "Everybody Wants To Be A Cat" was written by Al Rinker and Floyd Huddleston, is the last song in "The Aristocats" and is sung by Scatman Crothers as Scat Cat, Phil Harris as Thomas O'Malley, Thurl Ravenscroft as Bill Boss the Russian Cat, Robie Lester as Duchess, and Liz English as Marie. The lines that were sung by Shun Gon the Chinese cat, voiced by Paul Winchell, have been removed as they are now viewed as politically incorrect. This is one of the finest original production cels that exist from the stand out song "Everybody Wants To Be A Cat, " and features full figure images of both Thomas O'Malley and Scat Cat dancing on a ottoman. A perfect image a knockout for any animation art collection!

Measurements: Size - Thomas O'Malley & Scat Cat: 5 1/2 x 4 1/2", Cel 6 1/2 x 5 1/2", Image 6 1/4 x 10 1/4. Condition: See pictures below of the actual cel which is in excellent overall condition, as shown by the pictures below! All items we sell are from a smoke-free/mold-free home/workplace and are in excellent condition unless otherwise noted. I own every work pictured for sale and I stand behind every item. Please follow/bookmark me as a favorite and keep and keep checking back for more items for sale in the coming weeks.

For now, please check out my other Animation Drawings and Cels and other original modern and contemporary artwork for sale! The item "1970 DISNEY ARISTOCATS THOMAS OMALLEY SCAT CAT ORIGINAL PRODUCTION ANIMATION CEL" is in sale since Wednesday, January 9, 2019. This item is in the category "Collectibles\Animation Art & Characters\Animation Art\Production Art". The seller is "shadowline" and is located in Durham, North Carolina.