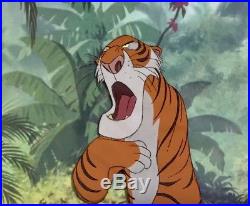 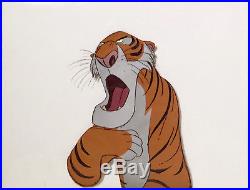 SHERE KHAN PRODUCTION CEL WALT DISNEY STUDIOS GOUACHE ON CEL, 1967. Original hand painted production animation cel of Shere Khan from "The Jungle Book, " 1967, Walt Disney Studios; Set on a lithographic background; Unframed. "The Jungle Book, " 1967 was the nineteenth animated feature film produced by Walt Disney Productions and inspired by Rudyard Kipling's book of the same name. The film was directed by Wolfgang Reitherman, it was to be the last film that was worked on by Walt Disney, as he passed away during its production. The film follows Mowgli, a feral child raised in the Indian jungle by wolves, as he encounters Bagheera the panther and Baloo the bear; who try and convince him to leave the jungle before the villainous tiger Shere Khan finds him.

Shere Khan, a Bengal tiger, is the main antagonist in the 1967 Walt Disney film "The Jungle Book;" an adaption of writer Rudyard Kipling's series of stories. Khan was voiced by George Sanders, a veteran actor with a deep bass voice and a heavy British accent.

According to Frank Thomas and Ollie Johnston from "The Disney Villain". The perfect choice for the voice was George Sanders, the complete cynic, who added the element of boredom. With this voice, we could imagine a tiger who would kill without concern or effort. Sanders was asked if he would like a drawing of Shere Khan as a souvenir, to which he responded, I suppose so. " Asked further if he would like Walt to autograph it, he replied, "How utterly absurb.

Why would I want his signature? He might want mine, I created the character.

Milt Kahl, the great veteran Disney animator, was in charge of bringing Shere Khan to life and so of course Kahl set out on a crash course in tigers. Kahl said in an interview: I learned so much about tigers by studying them that I didn't have to rely on any life action crutch. " From Disney animator Andreas Dejas about the animation of Shere Khan, "Great perspective walk, and I love the way the tiger lies down, upper body first, then the rear.

He is shown in a three quarters portrait image with his yellow eyes open, mouth wide open with his teeth visible, and his left right paw is over his chest. It really does not get better, just a spectacular setup of the villianous tiger that is perfect for any animation art collection!

Measurements: Size - Shere Khan: 6 1/2" x 5", Image 8 x 10. Condition: See pictures below of the actual cel, which is in excellent overall condition as shown by the pictures below!

The item "1967 RARE WALT DISNEY JUNGLE BOOK SHERE KHAN ORIGINAL PRODUCTION ANIMATION CEL" is in sale since Saturday, April 07, 2018. This item is in the category "Collectibles\Animation Art & Characters\Animation Art\Production Art". The seller is "shadowline" and is located in Durham, North Carolina. This item can be shipped worldwide.