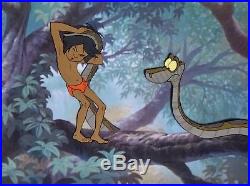 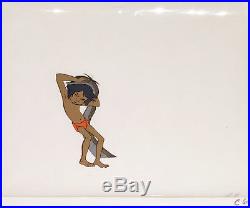 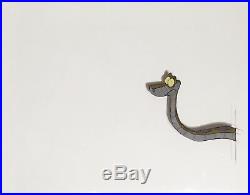 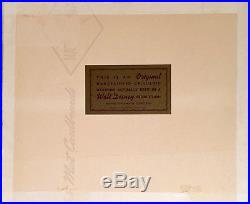 MOWGLI & KAA PRODUCTION CELS WALT DISNEY STUDIOS GOUACHE ON CEL, 1967. Original hand painted production animation cels of Mowgli and Kaa from "The Jungle Book, " 1967, Walt Disney Studios; Set on a lithographic background; Mowgli with Kaa's Tail cel numbered C6 lower right; With original Art Corner Certificate sticker and backing board; Unframed. "The Jungle Book, " 1967 was the nineteenth animated feature film produced by Walt Disney Productions and inspired by Rudyard Kipling's book of the same name. The film was directed by Wolfgang Reitherman, it was to be the last film that was worked on by Walt Disney, as he passed away during its production. The film follows Mowgli, a feral child raised in the Indian jungle by wolves, as he encounters Bagheera the panther and Baloo the bear; who try and convince him to leave the jungle before the villainous tiger Shere Khan finds him.

Beginning with 1961's "One Hundred and One Dalmatians, " "Woolie", as he was called by friends, served as Disney's chief animation director. In addition to "101 Dalmatians, " Reitherman directed "The Sword in the Stone" (1963), "The Jungle Book" (1967), "The Aristocats" (1970), "Robin Hood" (1973) and "The Rescuers" (1977). One of Reitherman's productions, the 1968 short "Winnie the Pooh and the Blustery Day, " won the Academy Award for Best Animated Short Film. In addition, all three of Reitherman's sons Bruce, Richard, and Robert provided voices for Disney characters, including Mowgli in "The Jungle Book, " Christopher Robin in "Winnie the Pooh and the Honey Tree, " and Wart in The Sword in the Stone. " Not only did Bruce Reitherman provided the voice of Mowgli in "The Jungle Book, but he also acted out certain scenes as live action reference for the animators.

The character of Mowgli was animated by quite a few animators, however Milt Kahl set the final design and the majority of Mowgli's scenes were animated by Frank Thomas and Ollie Johnston. Kaa the python, was animated by Frank Thomas in his entrance appearance of the film which is when Kaa first meets Mowgli and nearly eats Bagheera. Kaa was the second character who was originally voiced by Sterling Holloway, the first being Winnie-the-Pooh. Holloway's voice is just so wonderful in tone and pitch, and it is hard to imagine any other person doing the character justice.

Kaa is very similar to another snake character, Sir Hiss from "Robin Hood". The two share several traits as both use hypnosis, and both suck up to the film's main antagonist (Shere Khan in Kaa's case, and Prince John in Sir Hiss's case). Exceptions are that they are different colors, sizes, and Sir Hiss wears clothing (cape and hat).

"Trust In Me" ("The Python's Song") was sung by Sterling Holloway and was written by famed Disney songwriters, Robert and Richard Sherman. This is a great two cel setup of both Mowgli and Kaa, the villainous python. Mowgli is trying to unravel himself from Kaa's coils and Kaa is a great eyes open pose. Original artwork from "The Jungle Book" has become rare to the market, and this would be a wonderful addition to any Walt Disney animation collection! Measurements: Size - Mowgli & Kaa: 4 3/4" x 7 3/4", Image 7 1/4 x 9 3/4.

Condition: See pictures below of the actual cels, which are in excellent overall condition as shown by the pictures below! All items we sell are from a smoke-free/mold-free home/workplace and are in excellent condition unless otherwise noted. I own every work pictured for sale and I stand behind every item. Please follow/bookmark me as a favorite and keep and keep checking back for more items for sale in the coming weeks.

For now, please check out my other Drawings and Cels and other original modern and contemporary artwork for sale! The item "1967 RARE WALT DISNEY JUNGLE BOOK MOWGLI KAA ORIGINAL PRODUCTION ANIMATION CEL" is in sale since Monday, January 14, 2019. This item is in the category "Collectibles\Animation Art & Characters\Animation Art\Production Art". The seller is "shadowline" and is located in Durham, North Carolina. This item can be shipped worldwide.