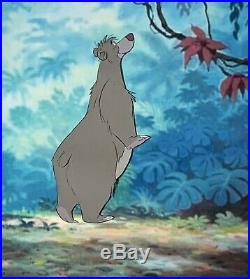 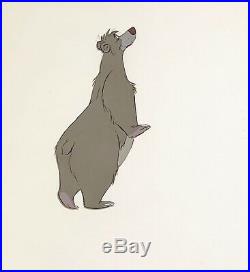 Look for the, bare necessities. Forget about your worries and your strife. "The Jungle Book, " 1967 was the nineteenth animated feature film produced by Walt Disney Productions and inspired by Rudyard Kipling's book of the same name. The film was directed by Wolfgang Reitherman, it was to be the last film that was worked on by Walt Disney, as he passed away during its production. The film follows Mowgli, a feral child raised in the Indian jungle by wolves, as he encounters Bagheera the panther and Baloo the bear; who try and convince him to leave the jungle before the villainous tiger Shere Khan finds him.

Longtime Disney collaborator Gilkyson was the first songwriter to complete several songs which followed Kipling's book closely; however Walt Disney felt that the works were too dark. The only piece of Gilkyson's work which survived to the final film, was his very upbeat song The Bare Necessities. The Sherman Brothers were then brought in to do a complete rewrite. Disney frequently brought the composers to the storyline sessions, and asked them to "find scary places and write fun songs" that fit into the story and advanced the plot. The popular success of the film in undoubtedly due to both the music and songs, that were primarily written by the Sherman Brothers.

Baloo, which means "bear" in Hindi, is one of the most beloved characters in the Disney pantheon. He is an obese blue-gray sloth bear, with large white claws.

Aside from King Louie, Baloo is the only animal character to walk on two legs in the film. He also resembles Little John from Disney's "Robin Hood, " who were both voiced by Phil Harris.

Harris also provided the voice of Thomas O'Malley from Disney's The Aristocats. " Baloo and Little John perform the same dance moves with King Louie in "The Jungle Book" and with Lady Kluck in "Robin Hood. " A little know fact is that Walt Disney was used as a reference for the animators for the dance moves seen when Baloo is first introduced in "The Jungle Book. Baloo was animated by Frank Thomas and Ollie Johnston.

Ollie Johnston animated the first introduction of Baloo but Frank Thomas soon took over the character and, unlike so many other animators; was known for doing most, if not all of the rough drawings for his entire scene. The Disney animator Andreas Deja wrote the following. This is actually not that unusual, since Frank usually contributed most or all of the drawings for any of his scenes. Other animators would often use a moving hold for calm moments, which involved only two key drawings with lots of in-betweens provided by the assistant.

But Frank seems to always have something going on, even in the most subtle acting patterns. Something is always moving, things dont come to a stop. As a result of producing so many drawings for a given scene, Frank could not focus on gorgeously designed poses or expressions. So his drawings by themselves might not look too intimidating to an animation student or professional, but watching them in motion is a whole other potato. The characters come to life in such a believable way, they breath, they move with weight, and they have real thoughts. In other words, they have a soul. This is a wonderful full figure, eyes open, and smiling image of Baloo The Bear. He is an impressive seven inches tall, a great piece from Walt Disney's full length feature film "The Jungle Book, " and a fantastic addition to any animation art collection! Measurements: Size - Baloo: 7 1/4 x 3 3/4", Image 10 3/4 x 10".

Condition: See pictures below of the actual cel, which is in excellent overall condition as shown by the pictures above! All items we sell are from a smoke-free/mold-free home/workplace and are in excellent condition unless otherwise noted.

I own every work pictured for sale and I stand behind every item. Please follow/bookmark me as a favorite and keep and keep checking back for more items for sale in the coming weeks. For now, please check out my other Drawings and Cels and other original modern and contemporary artwork for sale! The item "1967 RARE WALT DISNEY JUNGLE BOOK BALOO BEAR ORIGINAL PRODUCTION ANIMATION CEL" is in sale since Sunday, February 10, 2019.