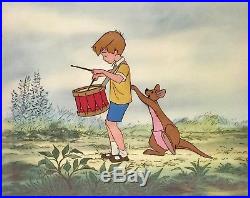 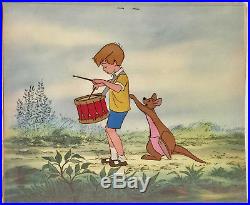 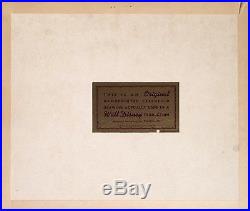 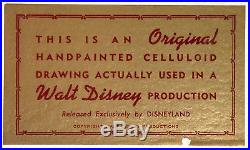 CHRISTOPHER ROBIN & KANGA PRODUCTION CELS WALT DISNEY STUDIOS GOUACHE ON CEL, 1966. Original hand painted production animation cels of Christopher Robin and Kanga used during the production of "Winnie the Pooh And The Honey Tree, " 1966; Walt Disney Studios; Set on a lithographic background; With original Walt Disney Art Corner label sticker verso; Unframed. "The Many Adventures of Winnie The Pooh, " 1977 was composed of a series of featurettes Disney produced based upon the Winnie-the-Pooh books by A. Walt Disney wanted to introduce the public to the Pooh characters slowly over time and the released featurettes include, "Winnie the Pooh and the Honey Tree, " 1966, Winnie the Pooh and the Blustery Day. " 1968, and "Winnie the Pooh and Tigger Too, 1974. For the full length film in 1977, extra material was added and used to link the three featurettes together. A fourth, shorter featurette was added at the end of the film and was based on the final chapter of The House at Pooh Corner.

Wolfgang Reitherman began working for Walt Disney in 1934, along with future Disney legends Ward Kimball and Milt Kahl. The three worked together on a number of early classic Disney shorts and Reitherman worked on Disney feature films produced from 1937 to 1981, including "Snow White and the Seven Dwarfs" (animating the Slave in the Magic Mirror) up to "The Fox and the Hound, " where he served as the co-producer for the film.

Beginning with 1961's "One Hundred and One Dalmatians, " "Woolie" (as he was called by friends) served as Disney's chief animation director. One of Reitherman's productions, the 1968 short "Winnie the Pooh and the Blustery Day, " won the Academy Award for Best Animated Short Film. In addition, all three of Reitherman's sons Bruce, Richard, and Robert provided voices for Disney characters. Bruce Reitherman was the voice for Christopher Robin in Winnie the Pooh and the Honey Tree. This is a wonderful pair of cels featuring Christopher Robin playing his drum and a great image of Kanga, both from "Winnie the Pooh and the Honey Tree, " 1966. Both cels appear in the scene when Christopher Robin and Kanga arrive at Rabbit's hole to find Pooh (who had become stuck in it due to overeating) was finally able to be budged by Rabbit. Christopher Robin while playing a drum and accompanied by Kanga, Roo, Eeyore, Owl, and Gopher arrive and begin to pull Pooh out of the hole; all the while singing the "Mind Over Matter" song.

The song was written by Robert and Richard Sherman, who had written most of the music for the Winnie-the-Pooh franchise over the years. As Christopher Robin and his animal friends are pulling Pooh from one side of the hole; Rabbit is pushing him from the other, and eventually Pooh is catapulted out of the hole and into the top of a nearby honey tree. These are wonderful full figure images of Christopher Robin playing his drum and Kanga that were both used in the first Pooh featurette "Winnie the Pooh and the Honey Tree, " 1966. Christopher Robin, despite being the main character and owner of all the stuffed animals in the Pooh world, is a rare character to find in original animation artwork.

He was in very few scenes and the majority of the Winnie the Pooh artwork in the market is either of the animal characters or is from features that were created in the 1980s or 1990s. In addition, Kanga is also rare to market from this early time period; and this is a fantastic full figure and eyes open image of her in a great action pose. A great early Walt Disney Art Corner setup, that is a wonderful addition to any animation art collection! Measurements: Size - Christopher Robin & Kanga: 6 1/4 x 7", Image 9 3/4 x 12". Condition: See pictures below of the actual cels, which are in excellent overall condition as shown by the pictures below! All items we sell are from a smoke-free/mold-free home/workplace and are in excellent condition unless otherwise noted. I own every work pictured for sale and I stand behind every item.

Please follow/bookmark me as a favorite and keep and keep checking back for more items for sale in the coming weeks. For now, please check out my other Drawings and Cels and other original modern and contemporary artwork for sale! The item "1966 DISNEY WINNIE THE POOH CHRISTOPHER ROBIN ORIGINAL PRODUCTION ANIMATION CEL" is in sale since Wednesday, November 7, 2018.