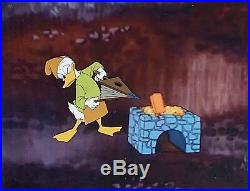 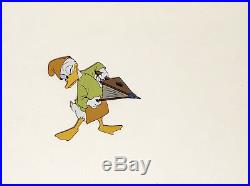 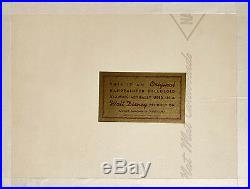 DONALD DUCK PRODUCTION CEL WALT DISNEY STUDIOS GOUACHE ON CELLULOID, 1965. Original hand painted production animation cel of Donald Duck from "Steel and America, " 1965, Walt Disney Studios; Set on a lithographic background; With original Art Corner Certificate sticker verso; Unframed. One of the greatest satisfactions in our work here at the studio is the warm relationship that exists within our cartoon family. Mickey, Pluto, Goofy, and the whole gang have always been a lot of fun to work with. But like many large families, we have a problem child.

You're right, it's Donald Duck. Donald Duck, the hot-headed anthropomorphic duck, was created by Walt Disney. His theatrical debut was in the short "The Wise Little Hen, " in 1934. Donald's fiery temper combined with his humorous manner of speech (which was performed by his original voice actor Clarence "Ducky" Nash) has earned the famous Duck numerous Academy Awards, more film appearances (over 150 shorts and films) than any other Disney character, and a popular series of comic books.

"Steel and America" is an educational short released by Walt Disney Productions on May 5, 1965. It was directed by Les Clark, produced for the American Iron and Steel Institute, and released in 16mm format. The film was used to promote the steel industry and combined live action sequences with animation.

"Steel and America" traced the history of the steel industry and follows the manufacturing process from raw iron ore to finished products. Donald Duck portrays a steelworker and the film run time is twenty-five minutes. This is a fantastic original production animation cel of Donald Duck. He is full figure and using a bellows to heat a kiln that is being used to melt a bar of iron.

A wonderful piece from a rare Disney film and this would be a great addition to any Disney animation art collection! Measurements: Size - Donald Duck: 4 x 4 1/2", Image 9 x 12".

Condition: See pictures of the actual cel, which is in excellent overall condition, as shown by the pictures above! All items we sell are from a smoke-free/mold-free home/workplace and are in excellent condition unless otherwise noted. I own every work pictured for sale and I stand behind every item. Please follow/bookmark me as a favorite and keep checking back for more items for sale in the coming weeks. For now, please check out my other Animation Drawings and Cels and other original modern and contemporary artwork for sale! The item "1965 WALT DISNEY DONALD DUCK STEEL AMERICA ORIGINAL PRODUCTION ANIMATION CEL" is in sale since Friday, February 1, 2019. This item is in the category "Collectibles\Animation Art & Characters\Animation Art\Production Art". The seller is "shadowline" and is located in Durham, North Carolina. This item can be shipped worldwide.