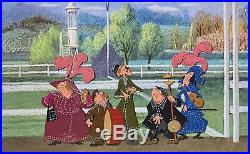 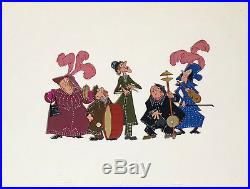 PEARLY BAND PRODUCTION CEL WALT DISNEY STUDIOS GOUACHE ON CEL, 1964. Original hand painted production animation cel of The Pearly Band set on a lithographic background from "Mary Poppins, " 1964, Walt Disney Studios; Unframed. Even though the sound of it is something quite atrocious.

"Mary Poppins, " 1964 was a musical fantasy feature film produced by Walt Disney Productions and was loosely based on P. Travers' book series of the same name. The film was directed by Robert Stevenson, with screenplay by Bill Walsh and Don DaGradi. "Mary Poppins" combined live-action with animation and stared Julie Andrews in the role of Mary Poppins; a practically perfect nanny who visited a dysfunctional family in London and employed a variety of techniques to improve the family's dynamic. Dick Van Dyke was brilliant in the supporting role of Bert. "Mary Poppins" was released on August 27, 1964 to universal acclaim; receiving a total of 13 Academy Award nominations, including Best Picture. The film won five: Best Actress for Andrews, Best Film Editing, Best Original Music Score, Best Visual Effects, and Best Original Song for Chim Chim Cher-ee. The popular success of the film in undoubtedly due to wonderful songs, that were written by the brilliant team of the Sherman Brothers. The song "Supercalifragilisticexpialidocious" is one of the stand out songs for the film, and the word entered the pop culture lexicon for being the longest word in the English language (which actually is not true). The song's writers stated that the word originated from their memories of creating double-talk speech as children, and took them only two weeks to write. "We remembered this wonderful word from our childhood, " said Richard Sherman who co-wrote the song with his brother Robert. The Pearly Band is a group of musicians who are all dressed in clothing adored with pearl buttons. They perform the song "Supercalifragilisticexpialidocious" and the group is composed of a lady in a magenta dress playing a tambourine, a short man in a black suit playing a bass drum, a tall man in a black suit playing the double spoons, another short man in a black suit playing a type of string instrument resembling a vertical banjo with a cymbal attached to the top, and a lady in blue dress playing a violin.

The item "1964 RARE WALT DISNEY MARY POPPINS PEARLY BAND ORIGINAL PRODUCTION ANIMATION CEL" is in sale since Friday, February 1, 2019. This item is in the category "Collectibles\Animation Art & Characters\Animation Art\Production Art". The seller is "shadowline" and is located in Durham, North Carolina. This item can be shipped worldwide.