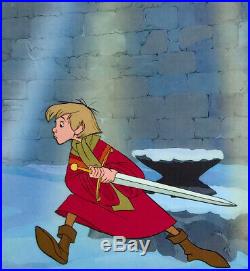 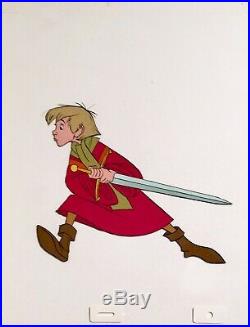 WART WITH EXCALIBUR PRODUCTION CEL WALT DISNEY STUDIOS GOUACHE ON CEL, 1963. Original hand painted production animation cel of Wart with Excalibur from "The Sword In The Stone, " 1963, Walt Disney Studios; Set on a lithographic background; Unframed. "The Sword in the Stone, " 1963 is the 18th full length feature film produced by Walt Disney and it was released on December 25, 1963 by Buena Vista Distribution. The film was based on the novel of the same name, that was first published in 1938. It was later republished in 1958 as the first book of T.

Also, the three voices all have Brooklyn-esque accents, which differed with the English setting for the film and with the accents spoken by all other characters. On Christmas Eve, Wart's foster brother Kay is knighted and Wart is reinstated as Kay's squire. On the day of the tournament, Wart realizes that he has left Kay's sword at an Inn, which is now closed.

Sir Ector, Wart's foster father, recognizes the sword as the one from the stone and the tournament is halted. Sir Ector places the sword back in its anvil, demanding Wart prove that he pulled it. Thinking now that anyone can pull the sword easily, Kay and others try unsuccessfully to remove it. Sir Pellinore and Sir Bart stand up for Wart and encourage him to try and pull the sword again.

This cel is from the scene when Wart has pulled the Sword Excalibur from the anvil and fulfills the prophecy that whoso pulleth out this sword of this stone and anvil is rightwise king, born of England. He rushes back to give the sword to Kay.

Later when Wart removes the sword again in front of others, he is crowned King Arthur of England and Merlin tells Arthur that he will go on to lead the Knights of the Round Table and become very famous. This is an extremely rare original production animation cel from the high point of the film. An absolutely phenomenal piece of original animation artwork perfect for any collection!

Size - Wart (King Arthur): 6 1/4 x 7 1/2", Image 10 1/4 x 9 1/2". Condition: See pictures of the actual cel, which is in excellent overall condition as shown by the pictures above! All items we sell are from a smoke-free/mold-free home/workplace and are in excellent condition unless otherwise noted. I own every work pictured for sale and I stand behind every item. Please follow/bookmark me as a favorite and keep and keep checking back for more items for sale in the coming weeks.

For now, please check out my other Animation Drawings and Cels and other original modern and contemporary artwork for sale! The item "1963 RARE WALT DISNEY SWORD IN THE STONE WART EXCALIBUR ORIGINAL PRODUCTION CEL" is in sale since Sunday, March 24, 2019.