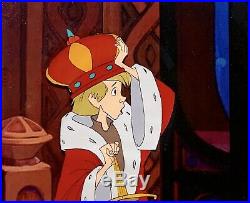 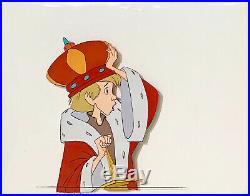 WART AS KING ARTHUR PRODUCTION CEL WALT DISNEY STUDIOS GOUACHE ON CEL, 1963. Original hand painted production animation cel of Wart as King Arthur from "The Sword In The Stone, " 1963, Walt Disney Studios; Set on a lithographic background; Unframed. I can't be a king, Archimedes. I don't know anything about ruling a country. I told you to leave the thing in the stone, boy. I'll, I'll run away, that's what I'll do. They'll just have to get somebody else.

Also, the three voices all have Brooklyn-esque accents, which differed with the English setting for the film and with the accents spoken by all other characters. The cel is from the last scene in the film which occurs after Wart/Arthur has pulled the sword (Excalibur) from the stone and is crowned King of England. As time passes, he feels unprepared for the responsibility of ruling an entire country. After confessing to Merlin's owl Archimedes, he attempts to run away, but every exit door of the castle is blocked by cheering crowds of people.

Merlin tells Arthur that in the future he will be famous, books will be written about him, and perhaps even a motion picture! In this cel Arthur is eyes and mouth open, sitting on the thrown, and grasping the top handle of Excalibur. Cels of Wart as King Arthur (wearing the crown and robe) are extremely rare because he is only in the film as King during the last few minutes of the movie.

Size - Wart (King Arthur): 6 x 4 1/2", Image 7 x 9". Condition: See pictures below of the actual cel, which is in excellent overall condition as shown above! All items we sell are from a smoke-free/mold-free home/workplace and are in excellent condition unless otherwise noted. I own every work pictured for sale and I stand behind every item.

Please follow/bookmark me as a favorite and keep and keep checking back for more items for sale in the coming weeks. For now, please check out my other Animation Drawings and Cels and other original modern and contemporary artwork for sale! The item "1963 RARE DISNEY SWORD IN THE STONE WART KING ARTHUR ORIGINAL PRODUCTION CEL" is in sale since Monday, January 27, 2020. This item is in the category "Collectibles\Animation Art & Characters\Animation Art\Production Art".