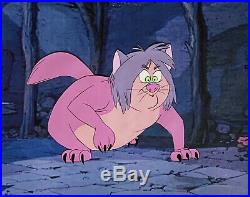 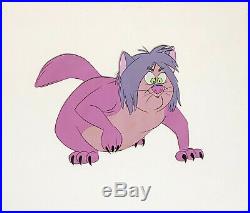 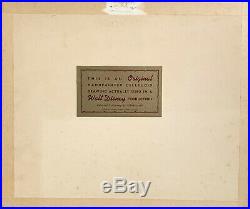 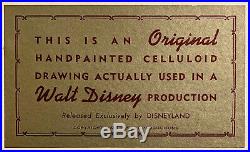 "The Sword in the Stone, " 1963 is the 18th full length feature film produced by Walt Disney and it was released on December 25, 1963 by Buena Vista Distribution. The film was based on the novel of the same name, that was first published in 1938. It was later republished in 1958 as the first book of T. White's tetralogy The Once and Future King. It was to be the final Disney animated film released before Walt Disney's death on December 15, 1966.

The songs in the film were written and composed by the Sherman Brothers, who would become very famous for their future work on later Disney films including; "Mary Poppins, " 1964, "The Jungle Book, " 1967, and "Bedknobs and Broomsticks, " 1971. Madam Mim was the villain in the film and was voiced by Martha Wentworth, a veteran actress with a long radio history dating back to the 1920's.

She was the voice of several Disney characters in "101 Dalmatians" including Nanny; and Mim was her final credited role. Madam Mim was animated by two of Disney's greatest animators Milt Kahl (who also designed the character, refining storyboard sketches from animator Bill Peet), and Frank Thomas. Kahl animated her first appearance in the film, her initial interaction with Arthur; while Frank Thomas oversaw her famous "Wizards' Duel" with Merlin. This cel is from the first appearance of Mim and occurs when Wart (soon to be King Arthur, but at the moment having been transformed into a bird by Merlin), accidentally falls down Mim's chimney. When Mim finds out the Wart had been transformed into a bird by Merlin, she transforms into a cat and says So, my boy, I'm afraid I'll have to destroy you...

Yeah, I-I'll give you a sporting chance. I'm mad about games you know. This is a wonderful cel of Mim in Cat form; her green eyes are open and she is beginning to stalk poor Wart in Bird form.

Condition: See pictures of the actual cel, which is in excellent overall condition as shown by the pictures above! All items we sell are from a smoke-free/mold-free home/workplace and are in excellent condition unless otherwise noted. I own every work pictured for sale and I stand behind every item. Please follow/bookmark me as a favorite and keep and keep checking back for more items for sale in the coming weeks. For now, please check out my other Animation Drawings and Cels and other original modern and contemporary artwork for sale!

The item "1963 RARE DISNEY SWORD IN THE STONE MAD MADAM MIM CAT ORIGINAL PRODUCTION CEL" is in sale since Wednesday, March 6, 2019. This item is in the category "Collectibles\Animation Art & Characters\Animation Art\Production Art". The seller is "shadowline" and is located in Durham, North Carolina. This item can be shipped worldwide.