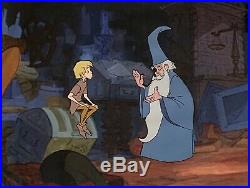 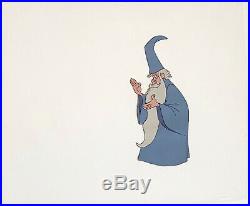 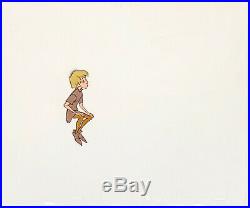 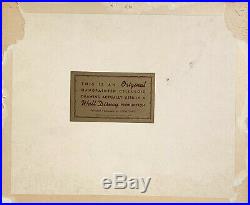 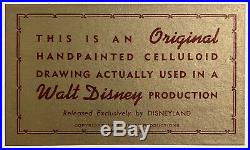 MERLIN & WART PRODUCTION CELS WALT DISNEY STUDIOS GOUACHE ON CEL, 1963. Original hand painted production animation cels of Merlin and Wart from "The Sword In The Stone, " 1963, Walt Disney Studios; Set on a lithographic background; With the original Walt Disney Art Corner label sticker verso; Unframed. "The Sword in the Stone, " 1963 is the 18th full length feature film produced by Walt Disney and it was released on December 25, 1963 by Buena Vista Distribution. The film was based on the novel of the same name, that was first published in 1938. It was later republished in 1958 as the first book of T.

White's tetralogy The Once and Future King. It was to be the final Disney animated film released before Walt Disney's death on December 15, 1966. The songs in the film were written and composed by the Sherman Brothers, who would become very famous for their future work on later Disney films including; "Mary Poppins, " 1964, "The Jungle Book, " 1967, and "Bedknobs and Broomsticks, " 1971. Merlin is a very powerful wizard with a pet owl named Archimedes. He befriends and becomes the teacher of a 12-year old orphan named Arthur, who goes by the name of Wart. Merlin is first seen living in a forest cottage, and he believes in the philosophy of Brain over Brawn. As a wizard, he is very intelligent, has a wide variety of powers, and is considered the most powerful wizard in the world. He has the ability to see into the future, and has the ability to shape-shift. Merlin was animated by Milt Kahl, Frank Thomas, and Ollie Johnston; and voiced by Karl Swenson who was an American theater, radio, film, and television actor. Wart was animated by both Frank Thomas and Ollie Johnston; and the voice was provided by three different actors; Rickie Sorensen, Richard Reitherman and his brother Robert Reitherman. This lead to noticeable changes in the character's voice between scenes. Also, the three voices all have Brooklyn-esque accents, which differed with the English setting for the film and with the accents spoken by all other characters.

This is a great two original production animation cel setup of both Merlin and Wart. Both characters are full figure, eyes open, and also still retain their original backing board with the art corner label.

An absolutely wonderful piece of original animation artwork perfect for any collection! Measurements: Size - Merlin: 6 1/2 x 3", Wart: 3 1/2 x 1 1/2", Image 9 x 12. Condition: See pictures of the actual cels which is in excellent overall condition as shown by the pictures above!

For now, please check out my other Animation Drawings and Cels and other original modern and contemporary artwork for sale! The item "1963 DISNEY SWORD IN THE STONE MERLIN WART ORIGINAL PRODUCTION ANIMATION CEL" is in sale since Wednesday, March 6, 2019. This item is in the category "Collectibles\Animation Art & Characters\Animation Art\Production Art". The seller is "shadowline" and is located in Durham, North Carolina.