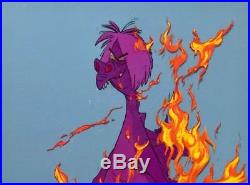 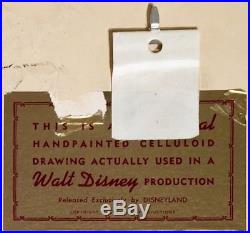 MADAM MIM & FIRE PRODUCTION CELS WALT DISNEY STUDIOS GOUACHE ON CEL, 1963. Original hand painted production animation cel of Mad Madam Mim in Dragon form with Fire Effects cel from "The Sword In The Stone, " 1963, Walt Disney Studios; Set on a lithographic background; With partial original Art Corner Sticker certificate verso; Unframed. "The Sword in the Stone, " 1963 is the 18th full length feature film produced by Walt Disney and it was released on December 25, 1963 by Buena Vista Distribution. The film was based on the novel of the same name, that was first published in 1938.

It was later republished in 1958 as the first book of T. White's tetralogy The Once and Future King. It was to be the final Disney animated film released before Walt Disney's death on December 15, 1966. The songs in the film were written and composed by the Sherman Brothers, who would become very famous for their future work on later Disney films including; "Mary Poppins, " 1964, "The Jungle Book, " 1967, and "Bedknobs and Broomsticks, " 1971. Madam Mim was the villain in the film and was voiced by Martha Wentworth, a veteran actress with a long radio history dating back to the 1920's.

She was the voice of several Disney characters in "101 Dalmatians" including Nanny; and Mim was her final credited role. Madam Mim was animated by two of Disney's greatest animators Milt Kahl (who also designed the character, refining storyboard sketches from animator Bill Peet), and Frank Thomas.

Kahl animated her first appearance in the film, her initial interaction with Arthur; while Frank Thomas oversaw her famous "Wizards' Duel" with Merlin. Although Mim claims to be more powerful than Merlin, during her opening scene she does only minor tricks. When Merlin stops her from attacking Arthur she challenges him to a Wizard's duel which involves mutating into various forms in order to best your opponent. She states that she is "mad for games, " and lays out the rules for her duel with Merlin.

At the very start of the duel, Mim breaks her own rule by disappearing and proves she can not be trusted. During the battle, Mim's incredible shape shifting abilities almost give her the upper hand against Merlin. She turned herself into: an alligator, a fox, a hen, an elephant, a tiger, a rattlesnake, and a rhinoceros, all of which were colored pink and finally into an ugly, purple, fire-breathing dragon.

She then asks Merlin (knowing that her rule stated no Pink Dragons), Did I say no purple Dragons? " However, Merlin outsmarts her by transforming into a fictional germ called "Malignalitaloptereosis that infects her with a chickenpox-like disease complete with red spots and a fever; effectively defeating her and illustrating the importance of knowledge over strength. This is a great cel of Mad Madam Mim in Dragon form with a Fire Effects overlay cel.

A three quarters image of her as a purple dragon, with her eyes and mouth open. A rare and wonderful cel setup of one of Disney's most memorable contemporary villains! Measurements: Size - Madam Mim: 5 1/2 x 3 1/4", Image 6 1/4 x 8 1/4". Condition: See pictures below of the actual cels, which are in excellent overall condition as shown by the pictures below! All items we sell are from a smoke-free/mold-free home/workplace and are in excellent condition unless otherwise noted.

I own every work pictured for sale and I stand behind every item. Please follow/bookmark me as a favorite and keep and keep checking back for more items for sale in the coming weeks. For now, please check out my other Animation Drawings and Cels and other original modern and contemporary artwork for sale! The item "1963 DISNEY SWORD IN THE STONE MADAM MIM DRAGON & FIRE ORIGINAL PRODUCTION CEL" is in sale since Sunday, September 23, 2018. This item is in the category "Collectibles\Animation Art & Characters\Animation Art\Production Art". The seller is "shadowline" and is located in Durham, North Carolina.