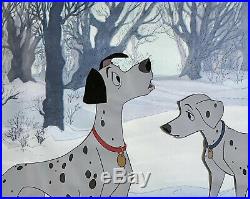 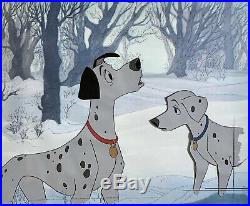 PONGO AND PERDITA PRODUCTION CELS WALT DISNEY STUDIOS GOUACHE ON CEL, 1961. Original hand painted production animation cels of Pongo and Perdita from "One Hundred and One Dalmatians, " 1961, Walt Disney Studios; Set on a lithographic background; With original Art Corner Certificate sticker verso; Unframed. My story begins in London, not so very long ago. And yet so much has happened since then, that it seems more like an eternity.

"One Hundred and One Dalmatians" ("101 Dalmatians"), is a 1961 full length animated feature film by Walt Disney Productions. It was adapted from Dodie Smith's 1956 novel of the same name. It stars Rod Taylor as the voice of Pongo and Cate Bauer as the voice of Perdita; with Betty Lou Gerson as the voice of the evil and villainous Cruella de Vil. The animation of all the characters from the film was quite extraordinary. The film "Sleeping Beauty, " 1959 was very expensive to make and it took a huge financial loss at the box-office; as a result, the Disney animation studio was considering closing.

According to famed animator Chuck Jones, Disney was able to complete the film for about half of what it would have cost if they had had to animate all the dogs and spots. To achieve the spotted dalmatians, the Disney animators envision the spot pattern as a star constellation. Once they had an "anchor spot, " the next spot was placed into the pattern, and so on until the fully spotted dalmatian was achieved.

All totaled, the film featured 6,469,952 spots, with Pongo having 72 spots, Perdita 68, and each puppy 32. Pongo was animated by Ollie Johnston and voiced by Rod Taylor, who was an Australian TV an movie actor who appeared in over 50 films.

It is unknown which actress recorded which lines. This is a fantastic original production animation cel setup of Pongo and Perdita. A large a beautiful portrait image of the pair, with both dogs eyes open and sporting their blue and red collars.

A great piece of artwork that is perfect for any animation art collection! Measurements: Size - Pongo & Perdita: 6 1/2 x 11", Image: 8 1/2 x 11". Condition: See pictures of the actual cels, which are in excellent overall condition as shown above! All items we sell are from a smoke-free/mold-free home/workplace and are in excellent condition unless otherwise noted. I own every work pictured for sale and I stand behind every item.