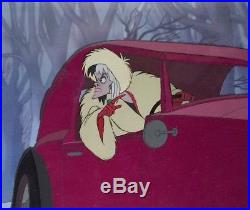 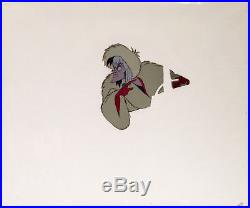 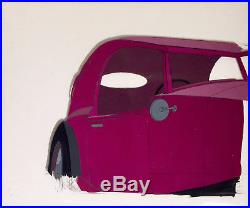 We'll find the little mongrels if it takes till next Christmas. And watch your driving, you imbeciles! Do you wanna get nabbed by the police? "One Hundred and One Dalmatians" ("101 Dalmatians"), is a 1961 full length animated feature film by Walt Disney Productions. It was adapted from Dodie Smith's 1956 novel of the same name.

It stars Rod Taylor as the voice of Pongo and Cate Bauer as the voice of Perdita; with Betty Lou Gerson as the voice of the evil and villainous Cruella de Vil. The animation of all the characters from the film was quite extraordinary. Pongo, who had a total of 72 different spots, was animated by the famed Disney artist Ollie Johnston. In the case of some Disney characters, drawings are more rare than the cels; for example Shere Khan from "The Jungle Book, " Prince John from "Robin Hood, " and Cruella de Vil from 101 Dalmatians. Cruella along with Maleficent are two of the most favorite of all the Disney villains, and they were both animated by Marc Davis.

The character was created by Dodie Smith for his novel "101 Dalmatians" in 1956, but it was Davis's visual interpretation that the world remembers. Although some of Cruella's traits were based in the novel, Davis along with Bill Peat, morphed the character by making her razor thin and exaggerating her oversized coat onto her thin frame. The long cigarette holder was modeled on one Davis used himself. Inspiration was also drawn from Hollywood legends Tallulah Bankhead, Bette Davis, and Rosalind Russell.

Movement, according to Davis, was consistent "like someone you wouldn't like, " and another inspiration was based on one woman I knew who was just a monster. She was tall and thin and talked constantly - you never knew what she was saying, but you couldn't get a word in edgewise. The voice of Cruella was provided by Betty Lou Gerson.

She had worked for Disney prior as the narrator for Cinderella, but her voice talent as Cruella De Vil is her tour de force! The highly pitched phrase Anita Darling! Is completely iconic and has become part of Disney pop culture. The following three paragraphs about the animation of Cruella's car is from Disney Wiki.

During the production of One Hundred and One Dalmatians, the studio came up with an idea on how to animate Cruella's Car, the animators built an actual white model of her car out of cardboard with bold black lines on the edges. To make the wheels articulate, the animators took a long piece of cloth, taped little pieces of wooden dowling underneath it and then put the car on top of the cloth suspended from a kite string, and then they would pull this long piece of fabric with all these pieces of wooden dowling underneath the wheels and they would shoot a take of that. To give it the look that the car had suspension they put in springs so it would have this little bouncy effect. The footage would then be run through the same Xerox process that was being used to transfer pencil line work onto cels and then painted to what was seen in the final film. When Cruella is seen driving her car up the hill of snow, a sand-like substance was used for it to drive through and shot it all in slow motion. The current status of the original model of Cruella's car remains in storage, mostly fully intact. These are very rare original production cels of Cruella De Vil and her Car. Cruella is eyes and mouth open, driving her car (that is registered as "DEV IL"), and looking for the dalmatian puppies that had escaped from being held prisoner by her henchmen Horace and Jasper. A great cel setup, perfect for any animation art collection! Measurements: Size - Cruella De Vil: 5 1/4" x 5 1/4", Car 9 1/2 x 12 1/4", Image 10 x 11 3/4". Condition: See pictures below of the actual cels, which are in excellent overall condition as shown by the pictures below!

All items we sell are from a smoke-free/mold-free home/workplace and are in excellent condition unless otherwise noted. I own every work pictured for sale and I stand behind every item. Please follow/bookmark me as a favorite and keep checking back for more items for sale in the coming weeks. For now, please check out my other Drawings and Cels and other original modern and contemporary artwork for sale! The item "1961 WALT DISNEY 101 DALMATIANS CRUELLA DE VIL ORIGINAL PRODUCTION ANIMATION CEL" is in sale since Tuesday, July 24, 2018.