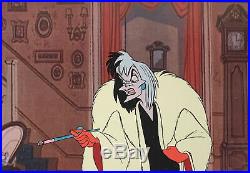 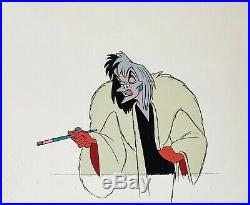 However, the limitation was that the camera was unable to deviate from a black scratchy outline, and the resulting cels lacked the fine lavish quality of hand inking. Cruella along with Maleficent are two of the most favorite of all the Disney villains, and they were both animated by Marc Davis. The character of Cruella De Vil was created by Dodie Smith for his novel "101 Dalmatians" in 1956, but it was Davis's visual interpretation that the world remembers. Although some of Cruella's traits were based in the novel, Davis along with Bill Peat, morphed the character by making her razor thin and exaggerating her oversized coat onto her thin frame. The long cigarette holder was modeled on one Davis used himself.

Inspiration was also drawn from Hollywood legends Tallulah Bankhead, Bette Davis, and Rosalind Russell. Movement, according to Davis, was consistent "like someone you wouldn't like, " and another inspiration was based on one woman I knew who was just a monster. She was tall and thin and talked constantly - you never knew what she was saying, but you couldn't get a word in edgewise. The voice of Cruella was provided by Betty Lou Gerson. She had worked for Disney prior as the narrator for Cinderella, but her voice talent as Cruella De Vil is her tour de force!

This is absolutely perfect cel of Cruella De Vil; she has her left hand on her hip, her eyes and mouth are open, she is wearing her classic mink coat, and holding her cigarette with holder in her right hand. A great addition to any Disney Villain or animation art collection! Measurements: Size - Cruella De Vil: 6 1/4" x 8 1/2", Image 8 3/4" x 12 1/2". Condition: See pictures of the actual cel, which is in excellent overall condition as shown above! All items we sell are from a smoke-free/mold-free home/workplace and are in excellent condition unless otherwise noted.

For now, please check out my other Drawings and Cels and other original modern and contemporary artwork for sale! The item "1961 WALT DISNEY 101 DALMATIANS CRUELLA DE VIL ORIGINAL PRODUCTION ANIMATION CEL" is in sale since Wednesday, March 4, 2020. This item is in the category "Collectibles\Animation Art & Characters\Animation Art\Production Art".