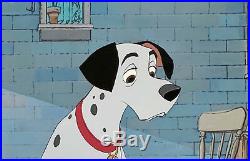 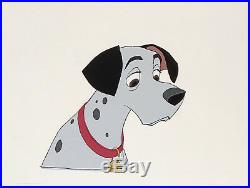 According to famed animator Chuck Jones, Disney was able to complete the film for about half of what it would have cost if they had had to animate all the dogs and spots. To achieve the spotted dalmatians, the Disney animators envision the spot pattern as a star constellation. Once they had an "anchor spot, " the next spot was placed into the pattern, and so on until the fully spotted dalmatian was achieved. All totaled, the film featured 6,469,952 spots, with Pongo having 72 spots, Perdita 68, and each puppy 32. Pongo was animated by Ollie Johnston and voiced by Rod Taylor, who was an Australian TV an movie actor who appeared in over 50 films.

This is a fantastic original production animation cel of Pongo. He is eyes open, wearing his red collar with golden tag, and looking down. A beautiful image, and a great addition to any animation art collection! Measurements: Size - Pongo: 6 x 6 1/2", Image: 8 1/4 x 12". Condition: See pictures of the actual cel, which is in excellent overall condition as shown above! All items we sell are from a smoke-free/mold-free home/workplace and are in excellent condition unless otherwise noted. I own every work pictured for sale and I stand behind every item.

Please follow/bookmark me as a favorite and keep checking back for more items for sale in the coming weeks. For now, please check out my other Drawings and Cels and other original modern and contemporary artwork for sale! The item "1961 RARE WALT DISNEY 101 DALMATIANS PONGO DOG ORIGINAL PRODUCTION ANIMATION CEL" is in sale since Tuesday, April 28, 2020. This item is in the category "Collectibles\Animation Art & Characters\Animation Art\Production Art". The seller is "shadowline" and is located in Durham, North Carolina.