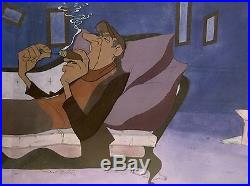 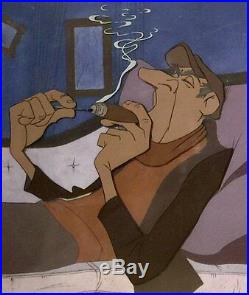 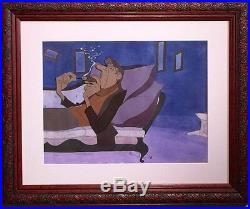 The animators responsible for the villains were Marc Davis who animated Cruella De Vil, and John Lounsbery who animated both Horace and Jasper Badun. From former Walt Disney animator Andreas Deja: Cruella De Vil's henchmen Jasper and Horace were principally animated by John Lounsbery (and beautifully so), but their final design was created by Milt Kahl based on story man Bill Peet's rough character concepts.

These two second rate criminals share a fairly low IQ, but in appearance they form a fun, strong contrasting duo. Jasper is tall, thin and gangly, Horace is tubby, short and roly-poly.

O'Malley had a long history with voice work for Disney: he was the Cockney guy in the "Supercalifragilisticexpialidocious" sequence in "Mary Poppins, " 1964, Cyril Proudbottom, Winkie, and a policeman in The Adventures of Ichabod and Mr. Toad, " 1949, Colonel Hathi and Buzzie in "The Jungle Book, " 1967, all the character voices in the "The Walrus and the Carpenter" segment (besides Alice), including Tweedledum and Tweedledee from "Alice In Wonderland, 1951. This is a great multi-cel setup of Jasper Badun smoking a cigar.

The cel setup consists of 1 Head cel, 2 Arms and cigar cel, and 3 Cigar smoke cel; and all three hand painted production animation cels are set on a custom hand-painted background. The image of Jasper is large, being an impressive 7 1/4" x 7 1/2".

A wonderful piece of animation artwork from one the most recognized Walt Disney feature films of all time! Measurements: Size - Jasper Badun: 7 1/4" x 7 1/2", Image 11 1/2 x 15 1/2", Frame 19 1/2" x 23 1/2. Condition: See pictures below of the actual cels, which are in excellent overall condition as shown by the pictures below! All items we sell are from a smoke-free/mold-free home/workplace and are in excellent condition unless otherwise noted. I own every work pictured for sale and I stand behind every item.

Please follow/bookmark me as a favorite and keep checking back for more items for sale in the coming weeks. For now, please check out my other Drawings and Cels and other original modern and contemporary artwork for sale! The item "1961 DISNEY DALMATIANS JASPER SMOKING CIGAR ORIGINAL PRODUCTION ANIMATION CEL" is in sale since Friday, November 9, 2018. This item is in the category "Collectibles\Animation Art & Characters\Animation Art\Production Art". The seller is "shadowline" and is located in Durham, North Carolina.